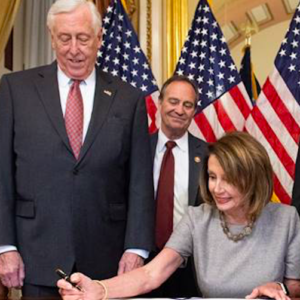 Nearly the entire House Democratic caucus, 224 of its 235 members, are co-sponsors of a bill directing the Trump administration to operate under the obligations of the Paris Climate accord, despite the climate pact’s unpopularity, high costs, and the near certainty that the House measure will never become law.

The Climate Action Now Act (H.R. 9), introduced by Rep. Kathy Castor, D-Fla., is expected to pass the House of Representatives along party lines in the coming weeks.

The bill  prohibits the Trump administration from spending any federal funds to implement withdrawal from the accord and “directs the President to develop a plan for the United States to meet its nationally determined contribution under the Paris Agreement, and for other purposes.” President Donald Trump withdrew the United States from the Paris Agreement in 2017, citing concerns over the pact’s impact on the American economy and what the president considered unfair treatment of the U.S.

“The Paris Climate Accord is simply the latest example of Washington entering into an agreement that disadvantages the United States to the exclusive benefit of other countries, leaving American workers — who I love — and taxpayers to absorb the cost in terms of lost jobs, lower wages, shuttered factories, and vastly diminished economic production,” Trump said when he announced America’s withdrawal.

Democrats, particularly those in the progressive wing of the party, have long complained about America’s exit from the international accord and virtually all of the 2020 Democratic candidates for president have pledged to re-enter the agreement if elected.

“H.R. 9 is a first step to get Congress off the sidelines and back into the game when it comes to beating the challenges posed by this threat [of climate change]. As Chairwoman Kathy Castor said: ‘This is not only a pragmatic issue, it is a moral issue for us,’” House Majority Leader Steny Hoyer, D-Md., said in a call with members of the press. “And I think if it’s put on the Floor, it will pass.”

Despite the overwhelming support of Democrats, Pacific Standard notes that only one House Republican,  Rep. Brian Fitzpatrick, R-Penn., is reportedly supporting the bill.  Meanwhile, several right-of-center policy organizations and political groups stand in opposition to the legislation.

“Congressional Democrats would like to stop the Trump Administration from withdrawing from the Paris Agreement and require the development of a ‘plan’ to meet that Agreement’s aspirational plans,” says Mark Mills, a senior fellow at the conservative Manhattan Institute. “One doesn’t need to debate climate issues to know something about this political confrontation.”

And while Democrats are delighted to vote for the accords, it also presents an opportunity for Republicans to highlight their support for a proposal that many economists agree would mean fewer jobs and higher energy costs.  For example, a 2017 report by NERA Economic Consulting suggests staying in the Paris accords would have cost the U.S. economy $3 trillion and more than 6 million industrial sector jobs by 2040.  And analysis from the Heritage Foundation finds it would drive up electricity costs for American households by up to 20 percent by 2035.

Polls show that, while Americans support climate action in theory, they oppose spending more on utility costs to achieve goals like those in the Paris Accords. The net result could be Republicans campaigning on House Democrats’ voting for higher electricity bills and fewer jobs, all on behalf of a bill that has no chance of ever becoming law.

Still, environmental activist groups like the Sierra Club are urging the House to move forward. They call the bill “an important step forward in rectifying Trump’s ignorant and dangerous decision.

“The bill is expected to easily pass through the House, reflecting the overwhelming bipartisan support for climate action,” the group said in a press release.