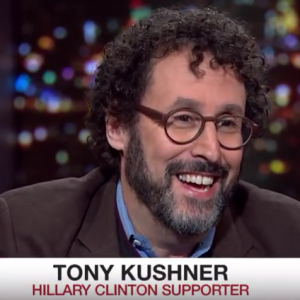 Tony Kushner, a Pulitzer Prize-winning playwright and Oscar-nominated screenwriter, appears on MSNBC on Tuesday to discuss the presidential campaign.
News

How Writing Spielberg’s ‘Lincoln’ Convinced Kushner to Back Clinton

Give Chris Hayes credit for fairness.

After Hollywood actress Susan Sarandon appeared on his MSNBC show on Monday — and made headlines for saying she might not vote for Democratic presidential front-runner Hillary Clinton if her candidate, Bernie Sanders, loses the primary — the host immediately booked a rebuttal for the next day.

On Tuesday, Hayes welcomed “another eminent progressive in the arts,” Tony Kushner, so the Pulitzer Prize-winner playwright and Oscar-nominated screenwriter could make the case for the former secretary of state.

The writer, who like Sanders is a socialist, pushed back against Sarandon’s attacks on Clinton for taking corporate money, staking out less liberal policy positions and being perceived as less trustworthy.

“I support Hillary Clinton,” Kushner said. “I think she would make an extraordinary president.”

He went on to say “Clinton has a more impressive record, and is a more skillful politician, which I think is more important ultimately than fantasies about how moral or immoral a person might be.”

“People on the internet are going to have things to say about that,” Hayes said with a smile.

And yet they didn’t really. There was scant coverage of Kushner’s appearance, and what was written focused, perhaps understandably, on him as a foil to Sarandon — two Hollywood types going head to head.

But that misses the most telling aspect of the writer’s case for Clinton, which gets to the heart of her differences with Sanders.

Kushner told Hayes, “I believe in electoral democracy as a way of affecting progress and even radical change, and there’s a lot of evidence in American history that that’s the case.”

It was an implicit endorsement of Clinton’s “insider” approach to working within the existing political system and a rebuke of Sanders’ “outsider” talk of “political revolution” forcing change in Washington.

What’s even more significant — and totally flying under the radar — is that Kushner explained his support for Clinton to the syndicated progressive Laura Flanders Show by talking about his work on Steven Spielberg’s 2012 film on Abraham Lincoln.

“Working on the ‘Lincoln’ screenplay changed me enormously,” he said. “I believe that in an electoral democracy compromise is necessary, and … I do believe that some of the most enduring, important transformations of human society that I’ve seen in my lifetime — and that I’m aware of as a student of history — have come about through electoral politics.”

Now, Sanders would be quick to say he works through electoral politics, but the thrust of the Vermont senator’s message is about people rising up to overthrow the existing order. Kushner told Flanders he began to question this approach after massive anti-war demonstrations failed to stop President George W. Bush’s invasion of Iraq.

“That was a huge turning point for me,” he said. “I began to really ask questions that I’m still grappling with about dreams of revolution, and what the dream of revolution has done to the progressive community, and whether or not change is more likely to be anticipated from movements that lie outside of the political, or if in mainstream politics revolutionary change can come about.”

Kushner said he believes it can, and he obviously thinks Clinton is more likely to get it done.