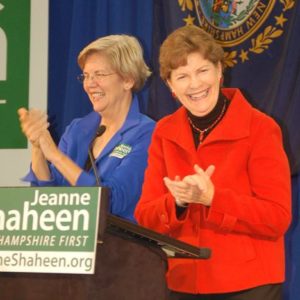 How ‘Bipartisan’ Is Sen. Jeanne Shaheen? We Have the Data.

A national political action committee funded by liberal activists like George Soros, Michael Bloomberg and actor Seth McFarlane is spending $200,000 on radio ads in New Hampshire to bolster the political fortunes of Sen. Jeanne Shaheen– the latest sign of concern over her ability to hold the seat in 2020.  The ad buy from the Senate Majority PAC comes just weeks after an Emerson University poll showed the New Hampshire Senator tied with Gov. Chris Sununu in a theoretical Senate campaign.

At one point the ad claims, “Here in New Hampshire, we know and trust Jeanne Shaheen – because Shaheen’s bipartisan values are New Hampshire values.”

But is that true? Does Sen. Shaheen really have “bipartisan values?”

The ad itself argues otherwise. It specifically defends Sen. Shaheen’s vote against the Born-Alive Abortion Survivors Protection Act, a bill that simply requires doctors who perform abortions to provide traditional medical care to any baby who survived one.  Opposing a basic-medical-care-for-dying-newborns mandate is hardly a moderate or bipartisan position. Three Senate Democrats voted across the aisle in favor of the bill. Sen. Shaheen, however, was not one of them.

Abortion, however, is a particularly contentious issue, which makes it a bad barometer for bipartisanship. And a single vote on such a divisive topic hardly answers the “how bipartisan are you?” question.

Which is why the Lugar Center– founded by the infamously bipartisan former Indiana Sen. Richard Lugar– reviews a broad range of votes by members of Congress before issuing their Bipartisan Index.  So how bipartisan was Sen. Shaheen in the last Congress?

Sen. Shaheen didn’t make the top 10 most bipartisan or even the top 25. In fact, Shaheen didn’t even make the top 50. Out of the 100 members of the U.S. Senate, Shaheen is ranked number 59 on the Bipartisan Index, below partisan hardliners like libertarian Sen. Rand Paul (R-KY) and progressive Sen. Sherrod Brown (D-OH).

Shaheen does rank ahead of her fellow New Hampshire Democrat Maggie Hassan (#65). But she’s far behind her colleague across the border, fellow New Englander Susan Collins (R-ME), who the Lugar Center ranks as the most bipartisan member of the current U.S. Senate.

Speaking of the Vermont senator, the American Conservative Union— best known for hosting the right-wing CPAC gathering each year– gives “socialist” Sanders a higher lifetime conservative average (6.78 out of 100) than “bipartisan” Jeanne Shaheen (4.34).  ACU president Matt Schlapp tells NHJournal this is due to Sanders’ now-abandoned support for the Second Amendment, which boosted his ratings just a bit.

Because the ACU focuses on conservative issues like gun rights,  it’s not a surprise that a New England Democrat would rank low on their scorecard (Shaheen’s ACU rating last year? Zero.)  But Shaheen has one of the lowest lifetime ACU ratings in the Senate today (she’s #16 out of 100), on par with hyper-partisans like Sen. Elizabeth Warren (D-MA) and Kamala Harris (D-CA).

On the other hand, Shaheen has a lifetime rating of 89.7 from ProgressivePunch.org, putting her to the left of Dianne Feinstein (D-CA) and Hillary Clinton running mate Tim Kaine (D-VA).

(The most liberal U.S. Senator? Liz Warren with a lifetime rating of 99.4)

Jeanne Shaheen’s in the bottom half of senators on the Bipartisan Index, has a 90 percent rating from progressives, and can’t break the 5 percent barrier with conservatives. Where’s the “bipartisanship?”

This isn’t necessarily a problem for the state’s senior senator.  New Hampshire is a purple/blue state with an all-Democrat congressional delegation. No Republican presidential candidate has won the Granite State since 2000.   It could be that a solidly-partisan Democrat is exactly what the voters of New Hampshire want.

But whether they want it or not, based on the data, that’s exactly what they’ve got.

There is no definition of “bipartisan” that includes the voting record of Senator Jeanne Shaheen.