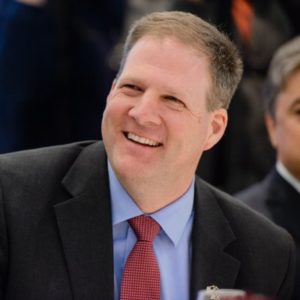 POLL: Sununu in Dead Heat With Shaheen in 2020 Senate Match-Up

Despite the #BlueWave that just washed over the Granite State, Gov. Chris Sununu is tied with two-term Democratic incumbent Sen. Jeanne Shaheen in a theoretical 2020 match-up for U.S. Senate, according to a new Emerson University poll released on Saturday. 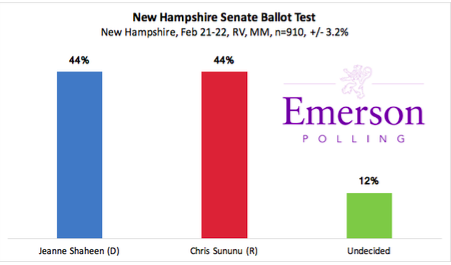 “When an incumbent is polling under 50% it is cause for concern,” Spencer Kimball, director of polling for Emerson University told NHJournal.  “However, I am unsure if the issue is with the incumbent or with a potential challenge from a popular governor who won by 7 points in his fall re-election campaign. A true measure of her vulnerability is if a primary challenger emerges.”

“These numbers show how weak Senator Shaheen really is, how strong Governor Sununu is, and how divided New Hampshire voters are,” says GOP strategist Dave Carney.

Since Sununu’s victory in the 2018 midterm, New Hampshire politicos have speculated about what his future might hold.  In 2017, then newly-elected Gov. Sununu publicly pledged “I will never run for the U.S. Senate,” telling the editorial board of the Seacoast Media Group, “I have no interest in being part of that process which I think a lot of Americans would agree with me, I do not have a whole lot of faith in (the) federal Congress and Senate right now.”

And in an interview with WMUR’s Adam Sexton in early January, Sununu reiterated that a run against Sen. Shaheen was “the furthest thing from my mind.”  But when pressed, Sununu said “Look, I’ll take anybody’s phone call.”

And it’s a call the Republican National Senatorial Committee is likely to make. There are no other competitive NH Republicans on the horizon to challenge Shaheen, and the NRSC could use some help in a 2020 cycle where the GOP must defend 20 seats, many in swing states like Maine, Colorado and Iowa.

Sununu is certainly outperforming his party in the purple environs of the Granite State.  Polling after the midterms found the New Hampshire Republican remains the fourth most popular governor in the U.S. with an approval rating of 60 percent.  Former NHGOP state party chair Jennifer Horn says Sununu’s popularity stems from “his willingness to work across the aisle for the good of the state.”

“Sen. Shaheen has become more and more partisan with each passing day, a trait Granite State voters do not admire. These results reveal a vulnerability for Shaheen that I’m sure is concerning to New Hampshire Democrats,” Horn said.

Sununu’s numbers are even more impressive when compared to President Trump’s poor performance in the state. Emerson found the Republican president underwater by 9 percent — 43 percent approve, 53 percent disapprove — among New Hampshire voters, though he still has 80 percent support from the GOP base.

So will Sununu run?

“The only Democrats Governor Sununu is focused on fighting right now are the ones in Concord proposing billions of dollars in new taxes on New Hampshire families,” Sununu senior advisor Paul Collins told NHJournal.