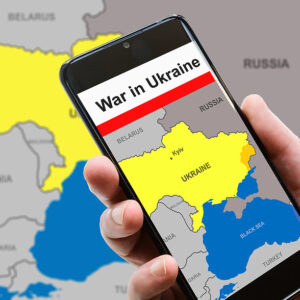 Both Ukraine and India have been on the receiving end of doomsday predictions — Ukraine when Russia invaded and India when COVID-19 struck. The overwhelming expectation was that Ukraine would fall in a matter of days against the Russian invasion and that India would be laden with dead bodies due to the coronavirus or starvation. People around the globe were closely watching India at the advent of COVID-19 since the country is home to one-fifth of the world’s population and tragedies in India would bring a spillover effect elsewhere.

Similarly, if Ukraine could not resist Russian aggression, geopolitical structures would undergo a complete overhaul.

However, India and Ukraine proved the doomsday predictions wrong. Both countries not only held their forts, but have even managed to emerge from the two tragedies stronger. (It may be premature to say so for Ukraine since the war is very much on, but early indications are promising.) These developments have caused surprise and shock among many intellectual communities.

So how did Ukraine and India manage to turn the tide? One common thread that stands out is the rampant development and unhindered reliance on their digital infrastructure.

Since India’s prime minister, Narendra Modi, took office in 2014, he has obsessively focused on digitizing India by leveraging demographic skills and reassigning finances. He started off allocating bank accounts to the poor, followed by an extensive demonetization exercise that pushed normally reluctant Indians to adopt digital payment modes such as India’s “Unified Payments Interface,” developed by the government. So, when COVID-19 struck, the Indian government could transfer money almost immediately to its most vulnerable people, avoiding corruption and bureaucratic delays.

In Ukraine, technology has been weaponized using cyberattacks, also destabilizing the country’s largest internet service provider. With disinformation deployed to create panic, Ukrainian president Volodymyr Zelensky’s investments in digitizing government functions have paid off in such a scenario.

Ukraine has been strategically using its digital resilience, such as the government-run Diia app, to crowdsource images tracking Russian troop movement, crowdfunding donations for the military, and maintaining a real-time stream of information on the status of attacks. In addition, the technology platform integrated within Diia (called Trembita) enabled the Ukrainian government to exchange citizen data across organizations securely, protecting conversations without leakage.

Zelensky also foresaw troubles from Russia early on and since 2020 has worked on expanding state-sponsored fiber-optic connections. Ukraine even used its Diia app to run the country’s COVID-19 vaccination drive, allowing citizens to make vaccination appointments and providing certificates — all on the app.

Similarly, India used COWIN as the technological backbone of its unprecedented vaccination drive. The country has now vaccinated more than 90 percent of its adults, doling out more than 1.9 billion vaccine doses. That’s no small feat!

India’s vaccination drive — reliant on made-in-India vaccines — has seen the fastest roll-out in the world. Not only did COWIN’s robust platform help Indians book vaccination appointments, but it also provided a QR-coded vaccination certificate immediately after taking the jab. The seamlessness of the app allowed even Indians in rural communities to use it effortlessly. On the back-end, the platform also allowed for vaccine supplies to be tracked and refilled on a real-time basis, all while ensuring that the data remained secure and resistant to leakage.

Even today, the United States and many countries in the European Union are issuing flimsy vaccine certificates without a centralized database, which can be misplaced or misused. It’s a stark contrast.

Technological independence guarantees key advantages for developed nations. Keeping that in mind, India has even offered its COWIN platform free to other countries — more than 12 countries now use it. Nations like Nepal have also begun to use UPI to move to digital transactions, foreseeing its broad scope.

It is also important to note the reliance of developed nations on China’s 5G providers and the security threat that such excessive dependence can pose. To their credit, India and Ukraine are heavily invested in developing fiber-optic networks, and most recently, India has also tested an indigenously developed 5G network, further enhancing its digital independence.

With India and Ukraine as case studies, the world needs to use its digital infrastructure better. Experiences from the two countries — once expected to fail — show a viable proof-of-concept during crises.

Priyam Gandhi-Mody is an author and political strategist. Follow her on Twitter @PriyamGM. She wrote this for InsideSources.com.