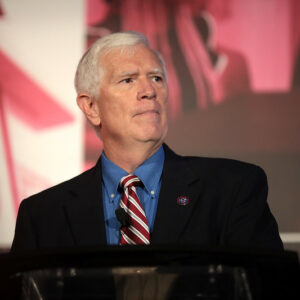 How Do Alabama’s GOP Senate Candidates Stack Up on Immigration?

But when it comes to former president Donald Trump’s signature issue — immigration — the candidates differ sharply. And those differences could prove decisive, especially since a recent Quinnipiac poll shows that immigration is the second-most important issue for Republican voters, behind only inflation.

All three candidates oppose illegal immigration, or at least claim to oppose it. That’s hardly surprising. A pro-open borders, pro-amnesty candidate wouldn’t stand a chance in any GOP primary, certainly not in Alabama, one of the most ruby-red (or perhaps crimson?) states in the nation.

But Britt and Durant seem to view immigration merely as a law-enforcement issue.

Durant’s website conveys the same message: “He opposes any pathway to citizenship that rewards lawbreakers and would deport illegals back to their country of origin, forcing them to come here through legal channels.”

The notion that low-wage foreign laborers are good for the American economy — as long as they come here legally — is a pro-business, rather than pro-worker, worldview. It’s the position of the U.S. Chamber of Commerce, large technology corporations, Wall Street titans and other affluent powerbrokers: the sorts of people who pay wages rather than earn them, and so prefer them to be low.

This support for the status quo is sadly not surprising, given their backgrounds. Britt previously served as president of the Business Council of Alabama, a corporate advocacy group. Durant is a wealthy executive.

Like many Republicans, he supports the border wall, wants to require corporations to use E-Verify to vet the legal status of new hires, and vociferously opposes amnesty.

But Brooks understands that the iron law of supply and demand applies regardless of foreign workers’ legal status. When labor markets are tight, workers have more leverage to bargain for better wages and benefits. By contrast, when there’s a glut of laborers, corporations can easily fill positions without paying much.

That’s why Brooks supports an overall reduction in legal immigration and specific reductions to guest worker visas and programs. He wants to end birthright citizenship, the Green Card lottery, and all immigrants’ welfare eligibility.

To her credit, Britt promised in late March that if she is elected, she will co-sponsor Arkansas Senator Tom Cotton’s Raise Act, which would cut legal immigration by half. She also expressed verbal support for many of Brooks’ signature policies.

It’s an open question, however, if she’ll follow through — or if it’s empty sloganeering, forgotten once the primary wraps up.

Brooks originally earned Trump’s endorsement, in large part, because of this shared commitment to pro-worker immigration policies. Trump succeeded in scaling back legal immigration. And as a result, wages rose prior to the pandemic. Workers at the bottom of the income scale, of all races, saw their income rise twice as fast under Trump as under President Obama, and workers without a college degree saw their income rise three times as fast. Right before COVID struck at the end of 2019, Alabama’s unemployment rate hit an all-time low of 2.7 percent.

Trump recently retracted his endorsement of Brooks since the congressman urged the former president to move past his 2020 election loss and focus on the coming midterm election. This does nothing to change Brooks’ record on immigration. The non-partisan immigration-reduction group NumbersUSA gives Brooks an A-plus on their “Immigration-Reduction Report Card,” which makes him one of their “True Reformers.”

The immigration debate isn’t just about crime and culture. It’s mostly about jobs. Less immigration means more opportunities and higher wages for American citizens. Mo Brooks gets it. And so far, he seems to be the only candidate in Alabama’s 2022 Senate race who does.

Stephanie H. Smith is a principal at the Thatcher Coalition, in Hoover, Ala. She wrote this for InsideSources.com.