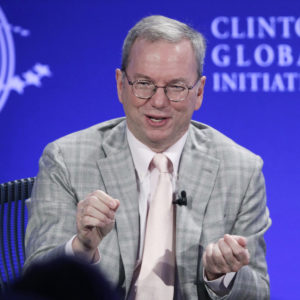 How Google Tried to Tip the Scales for Clinton

The Obama administration’s revolving door with Google has been anything but subtle over the last eight years, and a new report from a government watchdog out this week shows the Silicon Valley giant hoped to extend that relationship to what many expected would be a Hillary Clinton presidency.

According to Campaign for Accountability, a non-profit government watchdog, that door was already growing in scope while Clinton headed the State Department under Obama. At least 57 people shared affiliations with Clinton and Google or related entities at the State Department, the Clinton Foundation and her presidential campaign.

Clinton and her super PAC Priorities USA spent almost $1.5 million on services from those companies.

“Had she won the election, Clinton would have been significantly indebted to Google and Schmidt, whom she has referred to as her ‘longtime friend,'” the report reads. “For comparison, Schmidt’s future team at Civis Analytics was credited with helping produce his five million vote margin of victory during Obama’s 2012 election, and Schmidt subsequently enjoyed extensive access at the Obama White House.”

“[H]e’s ready to fund, advise, recruit talent, etc,” Podesta wrote after meeting with Schmidt in Washington, D.C. in 2014. Schmidt would continue to meet consistently with Clinton advisers to advise its voter targeting effort and data management.

“Clearly wants to be head outside advisor,” Podesta added before suggesting a meeting between Schmidt and Clinton campaign strategist Robby Mook.

As with most of the tech industry, Google donated heavily to Clinton over Trump, but Google notably became Clinton’s largest corporate contributor, according to the report, with at least six high-ranking executives and other employees contributing more than $1.3 million to her campaign coffers. The next highest corporate contributor was Microsoft with over $700,000 and Apple, which had its own close relationship with Clinton advisers per more Podesta emails, putting up more than $500,000, according to OpenSecrets.org.

“Had Clinton won the election, Google would have been able to capitalize on a close working relationship stretching back to her tenure as U.S. Secretary of State,” report authors wrote. “State Department officials traveled to Silicon Valley for meetings at Google’s headquarters attended by Schmidt, where they brainstormed how new technologies could be used to address diplomatic, development, and security concerns.”

Those efforts include the former secretary of state’s Internet Freedom agenda announced amid Arab Spring uprisings in the Middle East in 2010. Clinton advocated international open internet norms and encouraged the adoption of technologies like encryption and social media to protect privacy and advocate for change in repressed regimes like Egypt and Syria.

The door between the two has spun in both directions since Clinton’s tenure heading the State Department, where at least 19 officials have joined Google in recent years including Jared Cohen, a member of Clinton’s policy planning staff. Cohen and Schmidt built their own “foreign policy think-tank,” later dubbed Jigsaw, “that has carried out a wide range of missions, some in coordination with the State Department.” Cohen himself traveled to areas of conflict while working for Google “raising suspicions that he was acting as an unofficial backchannel for the State Department.”

“Had Clinton won the election, Google would have benefitted in current and new ventures from its extensive ties to her presidential campaign, her foundation, and the Clinton State Department,” the report reads. “Several of those ventures rely on government funding or would be subject to regulatory scrutiny.”

Clinton appointees at the Federal Communications Commission (charged with defending net neutrality and currently weighing rules that would let Google enter the set-top box market), at the Federal Trade Commission (looking at rules for internet of things devices, artificial intelligence and where the company has run into data privacy and anti-trust issues), and at the Department of Transportation (where standards will be set for the company’s self-driving cars), would all have likely benefitted Alphabet’s various business ventures.

“Beyond leaving its mark with Hillary Clinton, Google has proved highly adept during the past eight years at securing favorable decisions from federal agencies like the Federal Communications Commission, Federal Trade Commission, and the National Highway Traffic Safety Administration,” Campaign for Accountability said.

Though Alphabet bet heavily on Clinton, as did most in the valley, the incoming Trump administration is showing early signs the search giant may not be shut out in the cold. The Trump transition team has welcomed some Google allies to advise its efforts.

“Having failed to back the winning presidential candidate,” Campaign for Accountability explains, “Google is now seeking to soften its opposition to Trump. Schmidt congratulated Trump following his win, calling it an ‘amazing story.’ He also praised Trump-backer Peter Thiel, calling himself a fan of the Silicon Valley investor and entrepreneur.”