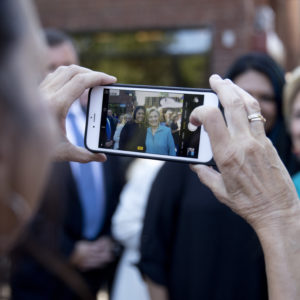 Apple Could Get a Seat in a Clinton White House

The Obama administration’s well-documented relationship with Google had no small impact on the last eight years, clearing regulatory hurdles for technologies like self-driving cars and A.I., using custom-made software to help the president get re-elected and opening the first high-traffic revolving door between the White House and one of Silicon Valley’s giants. Now peeks inside Hillary Clinton’s campaign for president via the leaked emails of campaign chair John Podesta suggest Google could be unseated by one of its competitors — Apple — in a future Democratic White House.

WikiLeaks’ latest dump of emails hacked from Podesta include more correspondence between Apple higher-ups and Clinton staffers, with the back-and-forth led chiefly by Podesta, who reportedly tops Clinton’s short list for chief of staff, and Lisa Jackson, a former EPA administrator under President Obama and Apple’s vice president of environmental policy and social initiatives.

Jackson works closely with Apple CEO Tim Cook, a policial novice, according to chatter between Clinton staffers who say she’s taken a lead role in steering Cook through Washington.

“Tim loves HRC – not very political but Lisa has been getting him to start being more active,” finance director for the Clinton campaign Dennis Cheng wrote to Podesta last June. “They’ve done a few fundraisers for Senate candidates. Would be great if Tim would host an event and also be helpful to other ways – personal endorsement, etc?”

The email preceded a meeting between Cook and Podesta where staffers urged caution for fear of putting too much pressure on the Apple CEO.

“Tim’s office requested a 1:1 meeting today, which was a nice way of saying ‘no staff,'” campaign fundraiser Lindsay Roitman wrote on a email chain including Podesta. “I think this is one we should proceed cautiously. He’s supportive but new to this so I think we shouldn’t come on too strong.”

More emails show the beginning of a revolving door with Podesta pitching multiple contacts to Jackson for jobs at Apple, while others document multiple meetings between the two and frequent back-and-forth on a number of technology and business issues addressed by the former secretary of state.

In one exchange, Podesta walked back Clinton’s support for withholding patents for ransom from companies in exchnage for taxes on their overseas assets (which Apple has many of). In another, Podesta convinced Jackson to take a public stance with the campaign after Clinton voiced her opposition to government-mandated backdoors into products featuring encrypted communciations like the iPhone.

“I wanted to reach out to say thanks for the principled and nuanced stance the secretary took last night on encryption and the tech sector,” Jackson wrote to Podesta after Clinton said “the back door is the wrong door” during the Dec. 19 Democratic presidential debate.

“I would not go that route,” Clinton said in response to a question about whether she would weaken encryption in exchange for greater surveillance of Americans’ communciations for the sake of national security. The question came after the San Bernardino ISIS-inspired shooting in December, during the early stages of the FBI’s fight with Apple to unlock the iPhone of one of the shooters.

“I don’t know enough about the technology,” she said, “but I’ve got enough confidence in our tech experts, and maybe the back door is the wrong door. I understand what Apple and others are saying about that.”

Clinton’s stance came after Jackson organized a briefing on the issue between Apple and Clinton staffers.

“Leadership at Apple certainly noticed and I am sure that is true though out the Valley,” Jackson continued in the letter to Podesta (which he forwarded to Clinton), adding encryption doesn’t preclude Apple from assiting law enforcement with access to metadata and “other very useful categories of data,” something she said the company does “thousands of times every month.”

“Lisa, Thanks. We are trying to hold the line in a crazy environment,” Podesta replied. “Thought any more about whether you could play a public role with us?”

The relationship bore exactly the kind of fruit the Clinton camp was hoping for. In August, Cook hosted a fundraiser for Clinton in California, also attended by Jackson, where ticket costs ranged from $2,700 to $50,000. Cook even made the short list of vice presidential picks for Clinton alongside Bill Gates and others.

Portions of Clinton’s technology platform already borrow heavily from Apple and Cook, who hammering away on Apple’s chief political issue earlier this year, said the choice between privacy and security painted by the FBI is a false one.

Cook and the company expounded on its position in an open letter and FAQ sheet, which states, “We feel the best way forward would be for the government to withdraw its demands under the All Writs Act and, as some in Congress have proposed, form a commission or other panel of experts on intelligence, technology, and civil liberties to discuss the implications for law enforcement, national security, privacy, and personal freedoms. Apple would gladly participate in such an effort.”

In what may be the first of many similar technology policy positions, Clinton agrees.

“Hillary rejects the false choice between privacy interests and keeping Americans safe,” the “Protect Online Privacy as well as Security” portion of her tech platform reads. “She was a proponent of the USA Freedom Act, and she supports Senator Mark Warner and Representative Mike McCaul’s idea for a national commission on digital security and encryption. This commission will work with the technology and public safety communities to address the needs of law enforcement, protect the privacy and security of all Americans that use technology, assess how innovation might point to new policy approaches, and advance our larger national security and global competitiveness interests.”