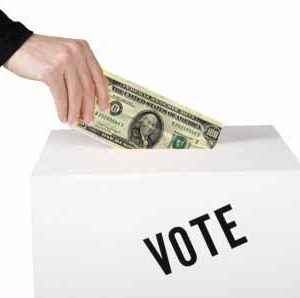 How Many Americans Know the House Just Passed Taxpayer-Funded Elections?

Do you want your state to let convicted felons vote? Do you want your tax dollars to pay for attack ads in your local congressional race? Should votes still count in your precinct if the voter who cast them doesn’t live there?

Under a new bill passed by the House of Representatives, it doesn’t matter what your answer to these questions is. They’ve already decided for you.

The bill in question, H.R. 1 – also known as the “For the People Act” – strips state election officials (and the voters who elect them) of the right to decide how to conduct elections in your state are conducted. And every Democratic member of the House voted for it.

Democrats say the bill will make it easier to vote and get the corrupting influence of big money out of America’s elections.  But to do so, they take control of those elections away from state and local officials and move it to Washington, DC.

“This bill would potentially have the federal government take over our elections,” says New Hampshire Secretary of State Bill Gardner.  Gardner has overseen elections in the First-In-The-Nation primary state since 1976 and is widely credited for both keeping the small Granite State at the front of the electoral line, and for promoting high voter turnout.

“We don’t have early voting, and we don’t have automatic voter registration,” Secretary Gardner notes, both of which would be mandated by H.R. 1.  “And in the last presidential election, we had the second-highest turnout based on the voter-eligible population. On the voting-age population, we were third. They are trying to fix problems we don’t have,” he told InsideSources.

New Hampshire has a strong, New England “town meeting” tradition of civic engagement at the local level. Other more urban states have different political cultures and election challenges. But the “For The People” act mandates the same election rules for every state.

“H.R.1 radically transforms the constitutional relationship between states and the federal government. It strips power from states to run their own elections,” says attorney J. Christian Adams of the Public Interest Legal Foundation. “This proposal would mark the largest transfer of power over elections from the states to the federal government in the history of the nation.”

Hans von Spakovsky, a former member of the Federal Election Commission and now a fellow at the Heritage Foundation, agrees. “It represents a federal takeover of the election process,” he tells InsideSources.

It also represents a revolution in how campaigns are funded by giving politicians tax dollars to finance their campaigns. In an article at the website The Intercept headlined “A Quiet Push to Make Public Campaign Finance a Reality,” Akela Lacy writes, “the law incentivizes candidates to target regular people for smaller donations rather than rich people for big ones.”

By “incentivizing candidates,” Lacy means paying politicians with taxpayer dollars.  Every eligible voter would get a $25 voucher that they could give to a politician, paid for with tax dollars. Taxpayers would also match small-dollar donations (up to $200) at a six-to-one ratio. If your neighbor gives $50 to Rep. Alexandria Ocasio-Cortez, for example, you and your fellow taxpayers would kick in another $300. If your ex-husband gives $200 to Donald Trump, taxpayers would add $1,200 to his campaign coffers.

But most of the concern over H.R. 1 has been over its impacts on local control and constitutional rights of freedom of speech and freedom of assembly. Those latter concerns are why even the Democrat-friendly ACLU opposes this bill, saying it would “unconstitutionally burden the speech and associational rights of many public interest organizations and American citizens and … chill speech essential to our public discourse.”

Some voters support these ideas. Some oppose them. But how many know that their local Democratic member of Congress just voted to take away their right to decide?

Do they know the House just voted to make Election Day a paid holiday for federal government workers?  (“Just what America needs, a bunch of government workers being paid to go out and work for,  I assume…our colleagues on the other side, on their campaigns,” GOP Senate Majority Leader Mitch McConnell quipped.)

And how many know that drawing voting districts in their home state will be done, not by locally-elected officials, but by a federally-approved committee?

According to Adams, “we all know that no part of H.R.1 is going to become the law during this Congress. This is merely an exercise in educating the public about a variety of election process changes that one political party would like to implement because they believe they will benefit from them.”

And while it’s true that Sen. Mitch McConnell has vowed not to let this bill get to the floor of the U.S. Senate–and even if he did, President Trump would certainly veto it– that doesn’t change the fact that a majority in the the “People’s House” just passed a radical revision to our democratic process that most people know virtually nothing about.