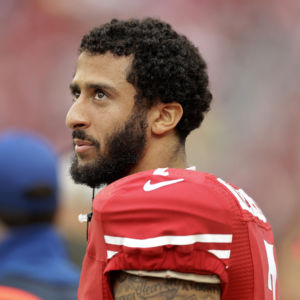 San Francisco 49ers quarterback Colin Kaepernick is planning to sit out the national anthem again Thursday night, continuing his controversial protest of America’s treatment of people of color. National debate over the move is only intensifying, with this evening’s San Diego game set to be a “Military Night” honoring “hundreds of thousands of current and retired military personnel.”

Kaepernick is stressing that his political statement isn’t meant as an affront to men and women in uniform — “I have family, I have friends that have gone and fought for this country, and they fight for freedom, they fight for the people, they fight for liberty and justice for everyone” — but his protest is inevitably being viewed through the prism of patriotism and support for the troops.

“I think it’s a terrible thing, and you know, maybe he should find a country that works better for him,” Donald Trump said Monday on “The Dori Monson Show” on Seattle’s KIRO-FM.

“Colin, if this country disgusts you so much, leave,” demanded conservative commentator Tomi Lahren in an incendiary viral rant from The Blaze last Friday.

The Lahren lines with the broadest appeal, though, may be these ones articulating how Kaepernick’s protest offends symbols many Americans view as sacred: “See, the national anthem and our flag are not symbols of black America or white America, brown America or purple America for that matter. There are patriots of every race that have fought and died for this country, and we honor the flag and sing the anthem as a reminder.”

This point matters more than the media seems to appreciate. In fact, what’s really missing from this national debate is acknowledgement of the moral psychology behind it.

In his book “The Righteous Mind: Why Good People Are Divided by Politics and Religion,” psychologist Jonathan Haidt concludes that conservatives have in their moral foundation a greater commitment to loyalty and sanctity than do liberals. The research helps explain why outrage over Kaepernick is strongest on the right.

In an interview on Freakonomics.com from May 12, 2012, he specified, “Some people see sanctity in physical objects, such as flags, which must be protected from desecration.”

The likes of Lahren make clear the same can be said of rituals like the national anthem.

It’s not just that these things are sacred either. As evidenced by the “America: love it or leave it” backlash rhetoric this week, conservatives see rejection of the flag and anthem as outside the bounds of respectable protest and a form of national betrayal. This is where Haidt’s “Loyalty foundation” of conservative moral psychology comes in: “The original trigger for the Loyalty foundation is anything that tells you who is a team player and who is a traitor, particularly when your team is fighting with other teams. … The love of loyal teammates is matched by a corresponding hatred of traitors, who are usually considered to be far worse than enemies.”

This analysis also reveals why conservatives and liberals talk past each other on these issues. Many on the left — and certainly in communities of color — aren’t going to feel quite the same sanctity or loyalty about their nation since they’re more prone to see its flaws. Their conception of patriotism is improving upon a great nation to make it greater.

Watching Lahren, many liberals are also wondering if her rage is about more than just Kaepernick. “We’ve had a black president for almost eight years now,” she said in her commentary, “Maybe he failed you. We also have a black woman in charge of the Justice Department. Maybe she failed you, too. Or maybe it’s the liberals, your saviors, which have run your communities into the ground. Where does the buck stop? When will those in black communities take a step back and take some responsi-damn-bility for the problems in black communities?”

John Hendrickson at Esquire thinks he knows what’s going on: “See where it pivots from singular to plural there? That’s when it stops being about Kaepernick. It was never about Kaepernick. This video is about Angry White People.”

Given that the conservative movement is overwhelmingly white, it’s hard to argue with him.