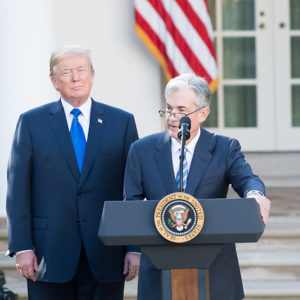 How the President Can Help the Fed and Economy

Given the recent market volatility and ongoing trade wars, Americans across the country are on edge about a potential economic downturn. During a press conference after the Federal Open Market Committee meeting last week, Federal Reserve Chairman Jerome Powell said that although the Fed holds a favorable outlook for the U.S. economy, it still felt the need to lower interest rates due to “weak global growth and trade policy uncertainty.”

True to form, on the day after the Fed meeting, President Trump announced a new 10 percent tariff on an additional $300 billion of Chinese goods starting in September. As we’re seeing retaliations by China play out in real time, these new tariffs won’t help the economy.

Any number of things can slow growth, create turmoil for businesses and customers, and make life more difficult for the Fed and other central banks around the world. Today, protectionist trade policies are doing just that, and the Fed’s decision won’t provide much of a counterweight.

There has been no shortage of data showing how the administration’s trade policies are harming American consumers and businesses. For example, recent work by economists Mary Amiti, Stephen Redding, and David Weinstein suggests that in 2018, President Trump’s higher tariffs raised the cost of imports by $3 billion per month. More than half of imports are inputs used by U.S. producers in their own products, raising the cost of producing U.S. goods.

And because tariffs disrupt supply chains, they reduce the efficiency of U.S. production, also raising costs. Amiti, Redding, and Weinstein estimate that this disruption added an additional $1.4 billion per month to the price tag of doing business.

Not only are the things we import now more costly, but tariffs generally limit the variety of products on the market. Retaliation from our trading patterns creates a similar dynamic abroad, weakening American exporters. Economists Fernando Leibovici and Jonas Crews have examined the impact of higher tariffs on the U.S. economy. They found tariffs depress GDP per capita, wages, and investment.

Less well understood, but no less important, are the economic effects of policy uncertainty. It is not just tariffs, but the uncertainty about future tariffs and economic policy in general that is messing with the economy, greatly affecting decisions that impact our earnings and prosperity.

Because of these changes in business and consumer decision making, any positive impact of lower interest rates on the economy would be muted. Chairman Powell and other Fed officials have good reason to be concerned. The president’s trade policy is making a difficult job harder. Moreover, his consistent criticism of the execution of monetary policy raises uncertainty about the future course of the Fed and ultimately the economy. Uncertainty over both monetary and economic policy are at cross purposes with the Fed’s goal of economic stability.

If the president wants to improve the performance of the economy, he needs to make economic stability a more obvious priority of his own. Doing that means finally putting an end to the trade wars and stopping with the attacks on Fed policies. With less uncertainty about the future course of monetary and trade policy, Americans could take full advantage of an otherwise strong economy.