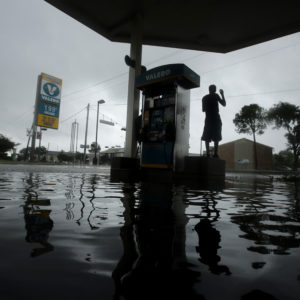 Once again, a massive, once-in-500-years storm has left a Gulf Coast city under water. Rescuers in private boats are still working around the clock to rescue stranded Houston residents, and the comparisons to Hurricane Katrina, which struck New Orleans in 2005, almost make themselves. Hurricane Harvey struck the Gulf Coast, where much of America’s offshore oil production and refining capacity is located. However, consumers are seeing a much more muted effect on prices, the result of increased shale and fracking development, which has helped to diversify America’s production centers. Hurricane Harvey demonstrates both the limitations of America’s energy infrastructure, and how recent developments in domestic energy production have helped to mitigate the harms.

At this point, the storm’s effect on energy prices has been far less significant than that of Hurricane Katrina. Hurricane Katrina sent futures prices for natural gas up by 28 percent for the remainder of 2005. Hurricane Harvey has, so far, raised 2017 futures by 3 percent.

Most of the change is due to shifts in where America gets its natural gas and oil. After years of offshore drilling, the explosive growth of shale production has diversified the sources of American energy.

The impact of a storm like Harvey is hard to overstate. Still, recent changes in the energy market have helped to diversify American energy suppliers. Domestic production has doubled in the past 10 years, but the share of production coming from the Gulf has decreased. Ten years ago, the Gulf coast supplied nearly 30 percent of the country’s oil production. By comparison, today it is responsible for just 15 percent. Suppliers in places like North Dakota are safely out of the reach of the storm and able to help pick up the slack for a fall in Gulf production.

Prior to Hurricane Harvey making landfall, offshore Gulf production was less than a third what it was when Hurricane Katrina hit 12 years ago. Texas is producing more oil than ever, but most of this comes from onshore development. Meanwhile, Pennsylvania, West Virginia, and other states are becoming major producers as well.

These other players in the energy market have not only helped diversify supply sources, they have helped keep prices low. While oil prices have recovered somewhat from their early 2016 lows, a supply glut continues. As of last week, U.S. oil companies had stockpiled more than 463 million barrels of crude. This is in addition to the nearly 700 million barrels in the Strategic Petroleum Reserve. This excess capacity means that there is additional flexibility in the market that will help cushion consumers from price shocks.

In the aftermath of the storm, the trucking industry noticed price increases on diesel in most regions of the country. Industry publications encouraged operators to purchase fuel early, anticipating that prices could rise even higher, with some experts saying that fuel prices could go up by as much as $0.25 per gallon.

Refining remains a bottleneck in American energy infrastructure. Although refining capacity has increased dramatically in the past several years, there are still only 141 operable petroleum refineries in the U.S. No significant new refining facilities have been built since the 1970s. This has left refineries clustered around the Gulf, where storm damage remains a threat.

For decades, the Gulf of Mexico and the area around Houston has been a center of offshore oil drilling and petroleum refining. Five out of the ten largest petroleum refineries in the U.S. are located in Texas and the Gulf region includes about half of the country’s refining capacity. According to company reports, by Wednesday, 4.2 million barrels of U.S. refining capacity had been shut by Harvey, including the biggest U.S. refinery, Motiva’s Port Arthur facility, which has a daily capacity of 600,000 barrels. As the storm moves through Louisiana, more plants may close.

On Wednesday morning, the Department of Energy reported that 15 refineries in Houston, Corpus Christi, and Port Arthur remained closed.

In flooded areas it will be difficult to gauge the extent of permanent damage until the waters have receded.

Hurricane Harvey shows how interconnected energy markets, both domestically and internationally, are affected by infrastructure-damaging natural disasters. On the one hand, energy infrastructure can help the country to avoid price shocks. On the other hand, as Houston and other cities on the Gulf Coast become major energy export centers, weather events there have the potential to affect international customers.

With the growth in domestic shale and fracking production, the coast of Texas has recently become involved in oil shipment. Late in 2015, Congress lifted a 40-year old ban on petroleum exports. Since then, oil exports, primarily to South and Central America, have grown in leaps and bounds. Currently, Corpus Christi is the largest port.

Earlier this summer, American producers reached a new export record, shipping 1.3 million barrels of crude per day onto the world market in June. Domestic producers stepped up production in response to cuts by OPEC members and a portion of this additional production was shipped overseas.

When it comes to American energy exports, oil is only part of the equation. Because of the refinery capacity centered around the Gulf, America also exports a large amount of gasoline. Since 2015, refineries have added over 800,000 barrels a day of capacity, which has helped to make the U.S. a critical world supplier. By June, more than $8.9 billion of gasoline had been exported through the Port of Houston, a 28 percent increase over last year.

Furthermore, Hurricane Harvey demonstrates the value of a diverse fuel mix for electricity generation. Despite the storm, two nuclear reactors at the South Texas Project plant near Houston were operating on Tuesday. A storm crew of around 250 workers was staying at the plant to keep its 2,700 megawatts of power generation operating. Keeping the plants in operation means that there is still access to electricity in the area.

Even now, only 2.4 percent of total Texas electricity customers have experienced outages. Utility companies in the state estimate that most of Corpus Christi will regain power by late Wednesday and 95 percent of other areas will have power by Saturday.