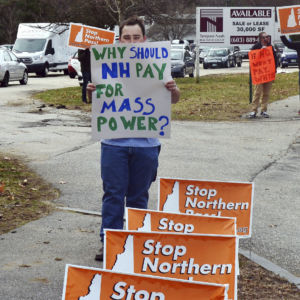 In this April 13, 2017 file photograph, Nick Paul, left, of Concord, and Tim Madsen, of Manchester, protest with three others from the group Protect the Granite State outside a hearing by the state's Site Evaluation Committee for the Northern Pass project in Concord, N.H. (AP Photo/Michael Casey)
News

New England wants to go green, but, in the case of New Hampshire, only as long as doing so doesn’t effect the view or make too much noise. Last week, the New Hampshire Site Evaluation Committee (SEC) denied an appeal on behalf of Northern Pass, a 192-mile, high-voltage transmission line that would have brought Canadian hydro-power through the state to Massachusetts. The denial is the latest development in the lengthy struggle to import needed clean power to New England. However, it could be the final nail in the coffin for the project, a decision which would have serious implications for the region’s energy supply and consumer prices.

Northern Pass is one of the largest-scale alternative energy projects ever proposed in New England. A joint venture between Eversource, New England’s largest energy provider, and Hydro-Québec. When completed, the high-energy transmission lines would bring about 1,100 megawatts of hydroelectric power from Quebec onto the New England grid. For years, however, the project has been meeting significant resistance from New Hampshire regulators concerned about the project’s impact on forests.

Eversource is threatening an appeal to the state Supreme Court to save the project and has criticized SEC decisions for being ad-hoc and violating the state government’s Right to Know laws.

“We will pursue all options for moving the project forward,” said Eversource spokesman Martin Murray. “We don’t take lightly an appeal to the Supreme Court. It’s a rare occurrence and one we take only when we have strong conviction and confidence that we will prevail.”

New Hampshire’s decision is likely to have significant implications for its neighbor, Massachusetts, which had been planning to purchase the hydro power transmitted on the Northern Pass lines in order to meet its clean energy goals.

The permit fight in New Hampshire has already impacted its neighbor. In late March, Massachusetts pulled out of a contract to use the transmission line to import clean power from Canada. Instead, Governor Charlie Baker’s administration and a selection committee began working on a deal with an alternate transmission project, New England Clean Energy Connect (NECEC), that would bring Canadian hydro power through Maine.

Already, this proposal is meeting with resistance from Maine environmental groups fretting about how the project would damage 53 miles of forest.

“Rather than allowing Maine regulators to go through the same thoughtful process that led New Hampshire to reject that project, Gov. Paul LePage, through a spokesperson, has vowed to ram the project through Maine’s Department of Environmental Protection,” according to the Natural Resources Council of Maine (NRCM).

The decision was also met with a lukewarm response from the Sierra Club, which praised the decision to pull out of Northern Pass, but worried that Massachusetts’s second-choice energy supply, the New England Clean Energy Connect project, would bring many of the same problems as Northern Pass.  The Sierra Club believes that the transmission line projects will destroy “pristine wilderness” in New Hampshire and the “traditional hunting and fishing grounds of First Nations in Quebec” while failing to reduce climate pollution.

“Governor Baker should choose the thousands of megawatts of new wind and solar projects in New England that offered competitive bids, that will actually reduce carbon pollution, and that can create the kinds of benefits for communities and workers needed without unnecessary negative consequences for the environment and First Nations communities,” said Emily Norton, Massachusetts Sierra Club chapter director and Catherine Corkery, New Hampshire Sierra Club chapter director.

Massachusetts’s attempts to transition away from fossil fuel generation are putting the state at risk of future rolling blackouts, the industry says. A report from ISO-NE, a regional utility, warned that the region risks power shortages during period of peak demand unless new fuels are brought on line. In a report about possibilities for the winter of 2024-25, ISO-NE predicted rolling blackouts in 19 of 23 situations, even with the presumption that two natural-gas fired units in Massachusetts would stay on line and transmission agreements would be signed.

“In New England, blackouts are expected to occur during the coldest weather, because that is when the grid is most stressed. Rolling blackouts add painful uncertainty – and danger – to everyday life. You aren’t likely to know when a blackout will happen, because most grid operators have a policy that announcing a blackout would attract crime to the area,” writes Meredith Angwin, a member of the ISO-NE consumer advisory group.

While environmental groups point to the impact construction could have on tourism, which brings hundreds of millions of dollars to the area, few are looking into how the region can meet its power needs and goals without infrastructure construction. These issues could come to the fore again as Maine regulators debate the alternate transmission project and the New Hampshire Supreme Court looks into the Northern Pass case.