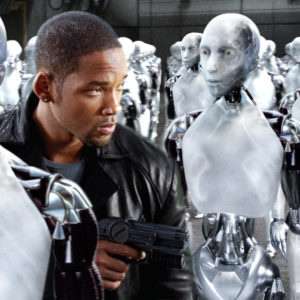 Will Smith in I, Robot
[IS] Opinions

I, Robot, What’s Next

Imagine workers who don’t pay taxes, with no IRS worries. Who don’t take lunch breaks. Or who don’t get paid for overtime. Or who don’t ever call in sick with a common cold. No personality conflicts, either.

Now, imagine a robot on the job. A seismic shift in economic alignment with international consequences? You bet.

“Robotics will be a revolution for our economy and in the way we think and act,” said Randy Bateman, an economist who is the CEO and president of Balcones Investment Research.

Bateman, appearing recently on a futuristic panel discussion titled “Will a Robot Take Your Job?” at the libertarian Cato Institute in Washington, expects the robotics industry to spearhead the next great transformative stage of our workforce.

And the tipping point for the Robotics Revolution occurred in 2014, mainly because of the increased deployment of drones, both commercially and militarily.

“Robotics is happening at a really, really good time in our country’s particular future,” asserted Bateman, whose research firm operates in offices in Texas, Florida and North Carolina.

“We are looking at a labor force that is slowing,” added Bateman, in reference to a heightened emphasis on STEM (Science, Technology, Engineering, Mathematics). “And we are looking at a level of productivity that is weaker than we have expected.”

Remember the sci-fi movie “I, Robot,” starring Will Smith and Bridget Moynahan? That cinematic dynamo is a bit extreme for this discussion, but let’s ask: Whose job is on the line in this new robotics economy?

What about booking flight plans? Ever notice we don’t deal with travel agents as often as we did in the 1980s and 1990s?

We saw the use of robotics in the auto-manufacturing industry in Detroit as early as the 1960s.

What about help desks for customer service? Did you speak to a live person the last time you called to check the balances on your bank accounts or stock portfolios? Probably not.

While schoolteachers likely are in the safe zone, many other occupations are on the block.

“Middle-skilled jobs are the ones most affected by automation,” said Adam Keiper, editor of The New Atlantis and a fellow at the Ethics and Public Policy Center in Washington. “In the service sectors — like restaurant wait staff, hotel personnel, certain kinds of medical professionals. And 25 percent of the jobs that exist today won’t exist in the next 20 to 25 to 30 years. To put it into context, that is about the unemployment rate of the Great Depression.”

Furthermore, because of robotics, Bateman expects dangerous jobs to be replaced, such as soldiers, firefighters, police officers, loggers, fishermen. Dirty jobs, he said, also would be jettisoned, including agricultural types, waste disposal personnel and slaughterhouse workers.

Explained Keiper: “Robots can be used either to replace or complement human labor. And in the decades ahead, we will see lots of both happening. In some settings, there may be new kinds of jobs for human beings to tend to our increasingly intelligent machines. Or otherwise keep human decision-making in the loop. But it’s generally agreed that the number of such machine-tending jobs will be much smaller than the number of jobs eliminated.”

Robotics also will be useful in exploration. Since Planet Earth is two-thirds water, robots will help mine the vast resources of the oceans.

Another factor in the robotics movement is Google. We’ve seen its test models of driverless vehicles. Now, imagine those high-tech roadsters advanced enough through the intersection of artificial intelligence and robotics to drastically reduce crashes, and thus highway deaths.

Japan and Germany have taken the lead in the robotics industry. Developing nations experiencing significant economic growth, such as heavily populated China and India, have a huge advantage for now because of their massive labor pools. But as the robotics industry expands, that positive will morph into a negative.

Said Bateman: “Those same workers will be at a major disadvantage as the use of robotics increases.”

Still, there is one element that robotics, research and rolling predictions cannot measure. That’s the X-factor of politics and corruption. How they interfere will be anyone’s guess.

In fact, as Keiper suggested, the U.S. government one day may implement a regulatory organization, perhaps named the Federal Robotics Commission, similar to the Federal Trade Commission and Federal Communications Commission.

However, some rogue nations, such as North Korea and Iran, could develop robotics with nefarious intent. Other unstable countries may not be able to control robotics within its own borders. And, like everything else in today’s climate of insecurity, there’s always the threat of terrorism or ISIS infiltrating the robotics realm.

A realm that has evolved.

Added Keiper of The New Atlantis, a quarterly journal specializing in science and technology issues and their relationship to social and political affairs: “Shipments for industrial use of robots have doubled in the past five years.”

As the shipments surge exponentially within the next 20 to 30 years, the city, state and federal governments likely will have to institute new policies.

Why? Because salaries are likely to stagnate as minimum-wage hikes will stimulate the use of more robots. Corporate profits will balloon. Labor unions may disappear or be forced to make wholesale changes, as unemployment is likely to rise. And since robots don’t pay taxes, the government must discover additional revenue streams.

“The government will have to tax corporations more,” Bateman said. “Social Security and Medicare will be affected because we have more people drawing from these funds than contributing.”

All of these issues could result in a previously unthinkable implementation for the unemployed in a capitalistic society: a guaranteed basic income.

“Especially from the left,” said Keiper, in referring to the specter of liberal politicians supporting this proposition.

Cautionary tale: Robotics may be gaining on us faster than we acknowledged.