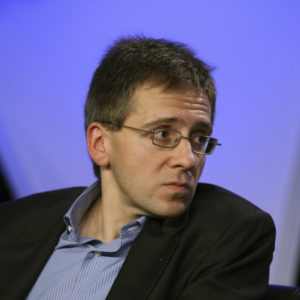 Ian Bremmer on the Big Tests in Foreign Policy

Ian Bremmer, founder and president of the Eurasia Group and foreign affairs columnist for Time, stopped by the George W. Bush Institute for an informal gathering in January. During the discussion with Bush Institute experts, he focused on China’s technological rise, Mexico’s presidential election and unilateralism. Below is his perspective on some of today’s most relevant foreign policy challenges.

Question: You have said that “we could see the end of globalization with the rise of China as an economic power.” Why is that?

Bremmer: Globalization implies that you increasingly have one global market that everyone can invest in. You have one set of global standards that align corporations around the world. But in the most important economic development in the world today, which is technology and particularly the development of artificial intelligence (AI), you actually have two competing systems. One is being driven by Silicon Valley and the other by Beijing.

They are competitive. And, unlike the U.S. and Chinese economies, which are interdependent, the relationship between the U.S. and China in technology and in particular AI is actually not interconnected. They are separate.

The Chinese are developing different companies in a different ecosystem. They’re creating a splinter-net as opposed to an internet. And that is probably the most important anti-globalization trend in the world today.

Q: If China and the U.S. are doing their own thing in this realm, do we have a bifurcated system?

Bremmer: We do. We have a global technology cold war.

Q: How does that resolve itself?

Bremmer: I’m not sure it does. Historically, when you have a rising power and a declining power, and they’re in conflict, you frequently have war.

That would render security measures in computing obsolete. These kinds of things are not as far off as you’d think.

Q: How do we deal with this rise? The U.S., after all, has a market economy, not a state-driven one that directs investments.

Bremmer: First, if we continue down this path, we will head to a confrontation that we both should be invested in trying to avoid. It seems to me that finding ways to cooperate, share information, and see if a splinter-net can be avoided should be a foreign policy priority. Even if it proves fruitless, it seems worth trying to consider.

Second, the American government needs to think of AI as a strategic sector and invest more in it. The Trump administration is investing in a lot of 20th-century things, such as strengthening the Army, Navy and Air Force. Those are not unimportant, but I don’t see a strategic plan for the game-changing sector, which is here and is artificial intelligence.

I do see that in China. The American government should make such a plan and do it in coordination with the firms who are spending the lion’s share of the cash on developing data sets and assessing them to hire the best AI talent in the world.

Q: There’s a big election coming up this summer in Mexico. It appears that Manuel Andres Lopez Obrador has the upper hand at the moment. We don’t know who will win, but what impact might his election have on our trade relationship with Mexico?

Bremmer: Anti-American sentiment in Mexico has risen significantly on the back of the electoral promise of a wall that the Mexicans will pay for, the demonization of immigrants, and the general feeling that Mexicans are taking advantage of us in trade.

This makes it more likely that Lopez Obrador will win. A victory by him would lead to a vicious cycle in deterioration of relations between these two countries. Also, it would make it harder to improve the quality of NAFTA (North American Free Trade Agreement) and renegotiate the treaty in a way that is useful for both sides, which has been a fairly consistent promise of President Trump’s.

The good news is that the president has backed off of some of the heated rhetoric of NAFTA in recent weeks. He’s heard from many of his advisers, CEOs and red-state governors that this would be damaging not just to the Mexicans but to our own economy. Still, I think there is a risk around this.

Bremmer: It’s more of a political risk for Mexico because all of their remittances, most of the tourism, and most of their trade dollars come from the United States. This would be devastating to their economy. This would give us more leverage but it would also hurt.

The supply chains are completely interlinked, which is very obvious in Texas. You don’t really think of Mexico as a foreign country in that regard. Many industries that are doing business in both countries sort of think of Mexico as just another state that they’re doing business in. That could become much more challenging and problematic with both the Trump administration and this possible new administration in Mexico.

Q: What is the difference between being a unilateralist and an isolationist? Which are we at this point?

The Trump administration is clearly not isolationist. It is much more unilateralist, and America First is a very big piece of that. I understand it in the sense that Trump personally, given his history in real estate, reality TV and the rest, is much more transactional. He is focused on individual deals. He’s not focused on long-term strategy.

The United States historically has been by far the most powerful country in the world. But in an environment where the global power balance is shifting away from the United States, the Chinese are becoming more powerful and many of our allies are weaker than they used to be. Unilateralism becomes a much more dangerous strategy than it would have been, say, in 1992 after the Soviet Union had collapsed.

William McKenzie is the senior editorial adviser at the George W. Bush Institute. He wrote this for InsideSources.com.