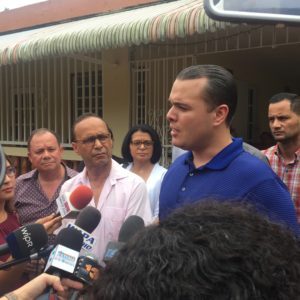 SAN JUAN, P.R. – When Rep. Luis Gutierrez pulled up to a house in the Candelaria neighborhood of the Toa Baja municipality in Puerto Rico, you wouldn’t have recognized him as a congressman. He was wearing a light pink, short-sleeved button-up shirt with black dress pants, loafers — not his typical suit attire he’s used to wearing in Washington D.C. with a pin identifying him as a member of Congress.

But Gutierrez is not the representative for Puerto Rico. He’s a Democrat from Illinois’ 4th Congressional District in Chicago, which has a significant Puerto Rican and Mexican constituency. Gutierrez is of Puerto Rican heritage and lived on the island during his high school years.

Gutierrez wasn’t campaigning when he went to the outskirts of San Juan, P.R. on Tuesday. He attended a community meeting with Toa Baja residents and environmental group advocates to discuss the landfill crisis and to see how it’s impacting people with his own eyes.

“It’s not unusual to have a congressman at a community hearing,” said Mark Magaña, president and CEO of GreenLatinos, a Latino environmental and conservation group, during the meeting. “He’s spent his whole career fighting for people and he’s a proud Puerto Rican. He is known as someone who will get dirty, get arrested, and speak to the president as he would you or I. It doesn’t surprise me at all that he’s here.”

He mostly sat in a plastic chair during the meeting, listening intently to the 20 residents and activists list the ongoing problems with the landfills and asking questions occasionally to better understand the situation.

“This is my island and one day, I want to come back here,” he told reporters in Spanish after the meeting. “But there needs to be a place to come back to. I wanted to see with my own eyes what was going on here and to tell the people they are not alone. I care that the people here don’t have the same quality of life as the people in Chicago. That’s not right.”

The municipalities and companies that run these landfills are not properly maintaining the site and have broken several federal regulations put in place by the Environmental Protection Agency, according to residents and environmental activist groups. 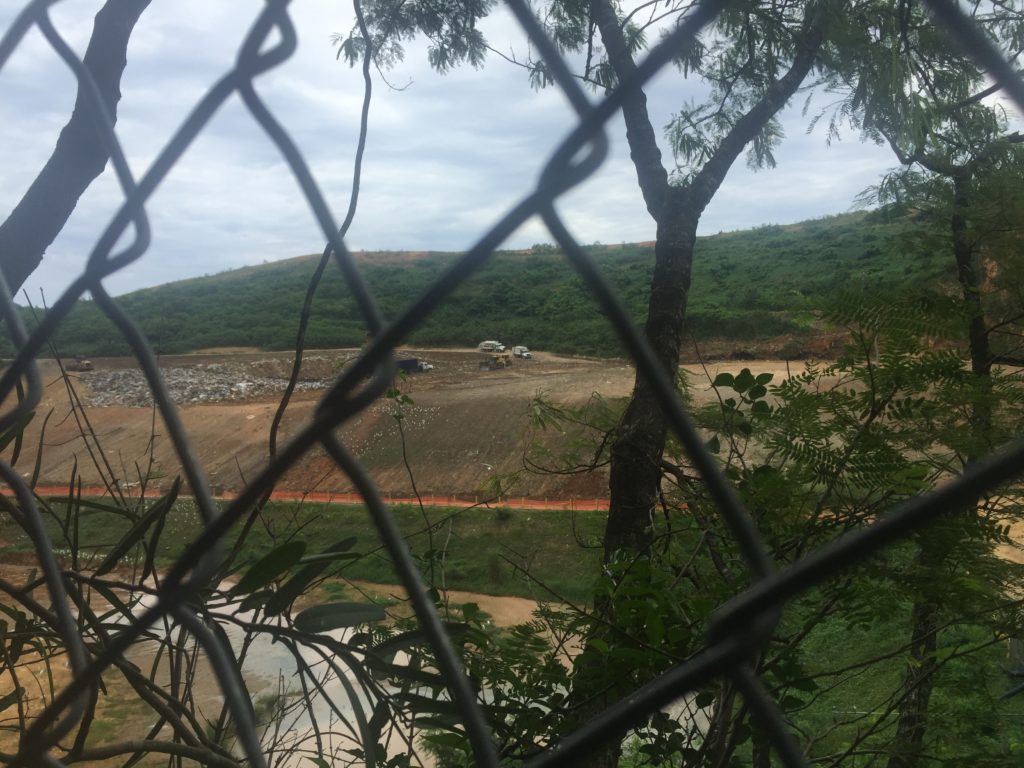 A view of the Toa Baja landfill from the Candelaria neighborhood, just outside of San Juan, P.R. (Photo Credit: Kyle Plantz)

Puerto Rico Limpio, a citizen’s action group for safe trash disposal, published a scathing report in August that said 19 out of the 27 active landfills in Puerto Rico are non-compliant with federal rules and the EPA has ignored these problems.

In 1994, the EPA gave Puerto Rico’s Environmental Quality Board local control over the landfills. Then, without EPA approval, the EQB changed some of its rules and regulations to make it easier and more profitable to dump trash at the landfills.

When the EPA found out about it in 2005, they threatened to take control away from the EQB if they did not bring their landfills into compliance. To this day, many of the landfills are over capacity and are not following EPA rules, such as requiring a plastic lining between the garbage and the soil, covering the trash each night and properly maintaining leachate lakes — the dirty water runoff from the trash.

“The municipalities and landfills are located in low-income, rural and low-educated areas,” said Hiram Torres Montalvo, cofounder of Puerto Rico Limpio. “We exposed them and everyone can see that this landfill [Toa Baja] should be closed today. It’s time for [EPA Administrator] Gina McCarthy to end the dereliction of duty to the people of Puerto Rico.”

The EPA announced last week that they would close the Cayey and Arroyo landfills in Puerto Rico within two to three years. Torres Montalvo said those closures aren’t enough and the EPA is just making false promises again. Several other landfills were supposed to have closed in previous years, but they remain operational today.

Adelaida Gonzalez lives in the home where the meeting took place. She said she lived there for 44 years and the landfill has been there for 30 years. When they started to build it, she voiced her concerns to authorities, but no one seemed to listen.

“The smell of the landfill was really unbearable for over a year,” she said in Spanish. “It is almost impossible for us to live here. Mosquitoes at night are alarming due to the Zika virus. We do not know what to do. Some of the people here have cancer and it’s not helping.”

How the landfills are affecting people’s health is one of the greatest concerns of environmental advocates. There has been virtually no testing on air quality or water contamination from seepage leaking into communities drinking water supply, the group alleges. 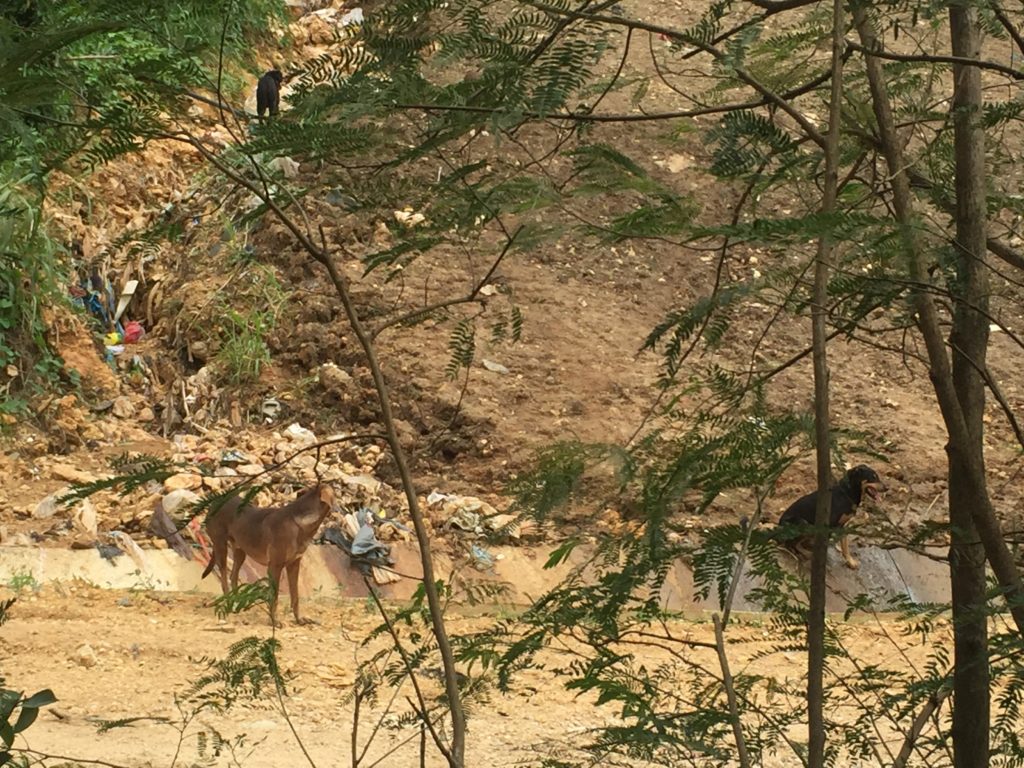 Dogs were able to pass by the unfinished fence near the Toa Baja landfill and were playing in the trash. (Photo Credit: Kyle Plantz/InsideSources)

After the meeting, Gutierrez went to the fence to see the landfill up close. There were trucks bringing in more garbage to dump and other trucks were moving the trash around. A small leachate lake, of dirty trash water, was visible near the fence and could create the perfect breeding grounds for mosquitoes and the Zika virus.

The Centers for Disease Control diagnosed about 16,000 Puerto Ricans with Zika, including at least 1,000 pregnant women. For expecting mothers, the concern with Zika is that their babies could be born with the birth defect microcephaly, which causes infants to be born with shrunken heads and other health issues.

As many as a quarter of Puerto Ricans may contract the Zika virus, which has spread at alarming rates. 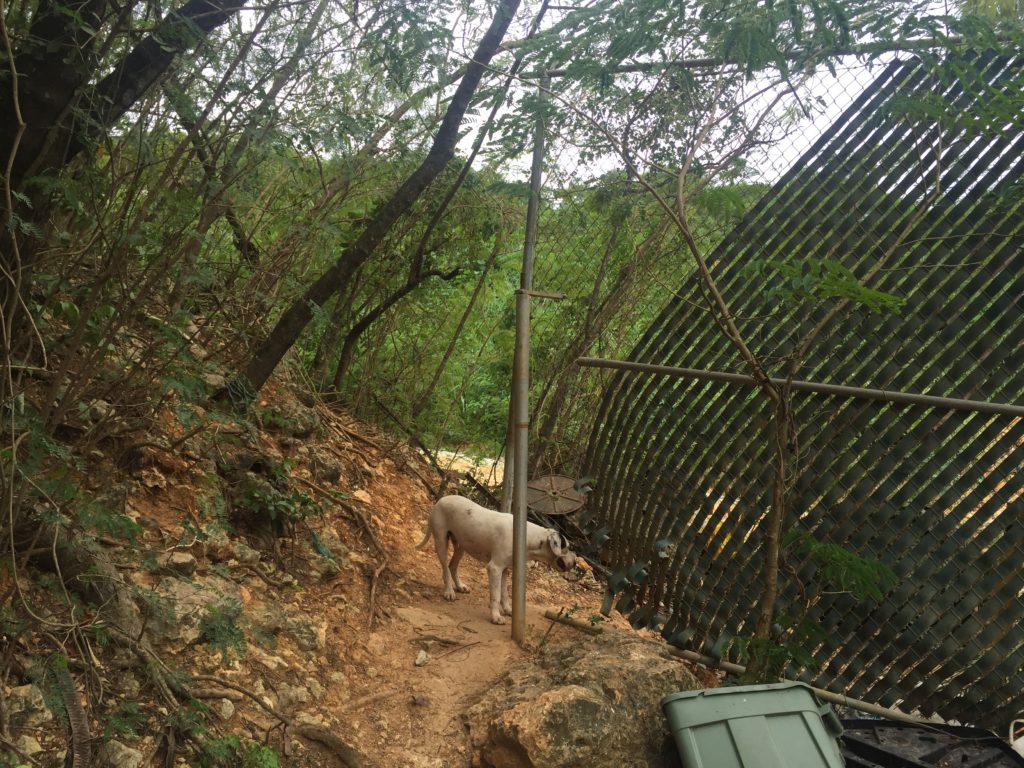 An unfinished fence near a resident’s home in Toa Baja. The landfill is right next to their house and the space between the fence and the natural mountain is big enough for people, dogs, and other animals to pass through. (Photo Credit: Kyle Plantz/InsideSources)

Gutierrez also went to another side of the Toa Baja landfill, where the fence stops right near a resident’s home. There is enough space between the end of the fence and the start of the mountain that people and animals can easily fit through it.

Trucks were passing by, dogs were playing in the trash and sewage water and the smell was significantly worse.

Gutierrez said the federal government should take back responsibility of the crisis.

“The government is failing the people of Candelaria,” he said. “If you had to live next to this landfill, is the government really protecting them? I would have to say no. We have to tell the federal government to assume its responsibility to them.”

Congress recently approved $1.1 billion in federal funding to fight the Zika virus. It’s unclear how they will spend it and how much Puerto Rico will receive to stop their outbreak.

And Congress also just passed in June the Puerto Rico Oversight, Management and Economic Stability Act, known as PROMESA (promise in Spanish), which aims to tackle the island’s billions of dollars of debt.

But Gutierrez has been very outspoken about his disapproval of PROMESA, saying the appointment of a fiscal control board could lead to another Flint, Mich. water crisis.

“You can see the manipulation. It’s a pretty word, but if they aren’t going to take responsibility of it, then what’s the point?,” he said. “When I make a promise, it’s for something good, not bad. You should have the same standards as they do in Chicago. It just doesn’t make sense.”