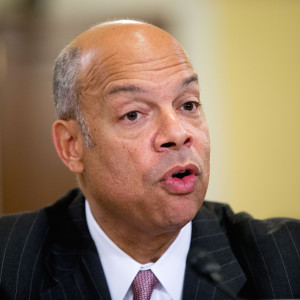 While the centerpiece of Barack Obama’s plan to provide legal status for an estimated 5 million undocumented immigrants remains tied up in court, Jeh Johnson said Thursday the administration is making progress on the rest of the unilateral agenda announced by the president a year ago.

The Homeland Security secretary, speaking to the Citizenship and Immigration Services Ombudsman’s conference in Washington, said the administration is optimistic about the president’s Deferred Action for Parental Accountability (DAPA) and a related expansion of the Deferred Action for Childhood Arrivals (DACA) program. Both are on hold while the Fifth Circuit Court of Appeals in New Orleans weighs whether the executive branch overstepped its bounds.

“We are disappointed that the district judge has enjoined the program,” he said, “and the expansion of the DACA program that we announced, but we will fight on. We are anxiously awaiting the decision of the 5th Circuit following the oral argument on July 10.”

DACA and DAPA were designed to protect from deportation millions of undocumented immigrants, including the so-called “Dreamers” and their parents. Dreamers are immigrants brought into the country illegally, often as small children, who in many cases are fully assimilated — except for their illegal status — into American society.

The president, who first promised an overhaul of the nation’s dysfunctional immigration system while campaigning for the White House in 2008, announced last November he would no longer wait for Congress. In a nationally televised address, Obama outlined DAPA, an expansion of DACA and a host of other measures cheered by immigration advocates and slammed by Republicans as an unconstitutional power grab.

The administration is awaiting a decision on its appeal of a Texas judge’s February injunction prohibiting implementation of DAPA and the expansion of DACA.

“Deferred action aside, we are moving forward with the other nine of 10 executive actions,” Johnson said. “The most significant of which is our reprioritization of how we use our resources for removal. We’re focusing more on [deportation of] felons over families.  Quality over quantity. And threats to public safety.”

Johnson’s defense of the president’s unilateral actions comes as immigration has emerged, again, as a critical issue in the contest for the GOP presidential nomination.

Billionaire Donald Trump catapulted himself over would-be Republican rivals this summer in large part by painting himself as a hard-liner on deportations — “They have to go,” he said in August — and by promising to build, once and for all, a wall on the border with Mexico.

Johnson didn’t mention Trump by name, but took a swipe that seemed to be aimed at the GOP front-runner: “We are not going to deport a population of people the size of New York City and Chicago put together in anybody’s administration.”

The Obama administration is also pushing back as Rep. Paul D. Ryan, the new speaker of the House, has been sharply critical of the White House on immigration.

The Wisconsin Republican, who challenged Obama as Mitt Romney’s vice presidential running mate in 2012, has made overtures to the White House on several fronts — most notably spending and trade — but has been more confrontational on immigration.

“Look, I think it would be a ridiculous notion to try and work on an issue like this with a president we simply cannot trust on this issue,” Ryan said in an appearance Sunday on CBS’ “Face the Nation.”

Because most of his fellow Republicans don’t trust the White House to hold up its end of any immigration deal, Ryan said, there’s little reason to expect movement on the issue until at least 2017, when a new president steps into the Oval Office.