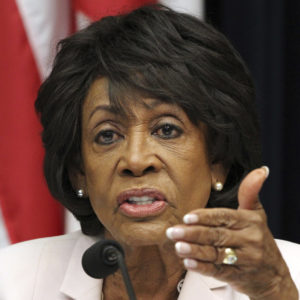 How is the “Maxine Waters” strategy working for Democrats?

In June, the California congresswoman exhorted an enthusiastic crowd of Democrats to confront Republican leaders “in a restaurant, in a department store, at a gasoline station, you get out and you create a crowd and you push back on them, and you tell them they’re not welcome anymore, anywhere!” she yelled.

“Already, you have members of your Cabinet that are being booed out of restaurants, who have protesters taking up at their house, who say, ‘No peace, no sleep.  No peace, no sleep,'” Waters told the crowd. “God is on OUR side!”

Maybe He is. But what about swing voters?

The scenes of angry anti-Kavanaugh activists shouting down senators on elevators, harassing them at airport terminals—even chasing them into the bathroom—are all over the media.  Following the advice of Rep. Waters, passionate Democrats are pushing their way into the faces of public officials and pronouncing them as “pro-rape,” often at the top of their lungs.

The activists are certainly energized. More than 300 protesters were arrested by Capitol Hill police on Thursday alone.  But are they aware of the impact these images of screaming confrontations are having in living rooms and on laptops outside the beltway?  If the available data are any indication, the answer is: “Not good.”

“There’s been a wake-up call to the Republican base,”  Lee Miringoff, of the Marist Institute for Public Opinion told the Wall Street Journal.  His polling found that July’s 10-point advantage among voters who said November’s election is “very important” in July is now down to two points.

This shouldn’t be surprising. A recent Harvard/Harris poll found that a majority of voters think the Kavanaugh confirmation process was mishandled, and 69 percent say it has devolved into “a national disgrace.”  Democrats are on TV literally embracing that disgrace.  Is that a smart, swing-state strategy?

Most of the political analysis has focused on the impact to each party’s base. “Pre-Kavanaugh, Democrats were at a 9.5 motivation level and Republicans were at a 6. Post-Kavanaugh, Democrats are at a 10 and Republicans are at a 9,” GOP strategist Andrew Surabian told the Daily Beast. But there’s been little public discussion on how less-partisan voters perceive this fight.  The Harvard/Harris poll seems to indicate that there’s a significant bloc of voters genuinely concerned about treating both Dr. Christine Blasey Ford and Judge Brett Kavanaugh fairly. For example, 60 percent of voters said they would support Kavanaugh’s confirmation if the FBI investigation found no corroborating evidence.

Also, the Cook Political Report on Thursday moved the Montana US Senate race from “Lean Democrat” to “Toss Up,” and the New Jersey race from “Likely” Democrat to “Lean.”

Sen. David Purdue (R-GA) was one of the senators hounded by angry activists at Reagan Airport. His wife was with him, and she had the anger inflicted upon her, too.  When the senator stepped into an airport men’s room, the protesters shouted warnings at him: “You have to exit the bathroom at some point!”

Sen. Perdue took to the floor of the U.S. Senate afterwards and called out some of his fellow senators, as well as Rep. Waters, for using “the tactics of the Brownshirts in Germany in the 1930s.”

Rep. Maxine Waters doesn’t agree. We will get a final answer from the American people in November.