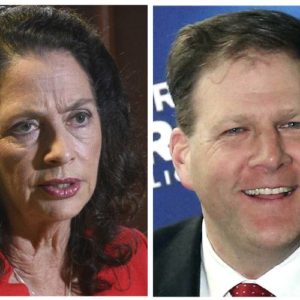 In N.H., Molly Kelly Might Not Be Able to Beat Sununu. But Brett Kavanaugh Could.

The conventional wisdom on the NH race for governor is that, if everything goes as usual, a popular, first-term governor will get a second term from Granite State voters.  But 2018 is hardly a “conventional” year, thanks to one word:

While it’s true that the progressive wave (or was that a “ripple,” Gov. Cuomo?) didn’t make its way to the NH Democratic primary, there’s no doubt that Trump’s numbers in the state are lousy (his approval rating is -13) and there are some Democrats in the state who are more passionate about opposing the president than they are supporting any state or local candidates.  Just as President Trump is overseeing a red-hot economy but can barely keep his approval rating above 40 percent, it’s possible that New Hampshire’s economic successes under Gov. Chris Sununu could be overlooked by local voters desperate to wage war on the Trump administration.

And now, 50 days before the election, throw in the Brett Kavanaugh fight.

The details of the Kavanaugh story are still evolving, but in its way the story is a perfect storm for Republicans. It touches on the #MeToo movement, the GOP’s declining support among women voters and the scandalous character of the country’s top Republican.  This story would not have the same political power during a Rubio or Fiorina presidency.

New Hampshire’s two US Senators had already announced they were “no” votes on Kavanaugh before any hint of this story broke. (Shaheen’s reasoning was dubious, but had nothing to do with the allegations against Kavanaugh). Molly Kelly is already anti-Trump, and Democrats were already working to tie Gov. Sununu to the unpopular president.  So far, it hasn’t worked.  Sununu remains one of the most popular governors in the country.

But a heated, high-profile, national debate over issues of sexual assault and the treatment of women is a political loser for the GOP, regardless of the details in the Kavanaugh case.  If the Trump White House mishandles this issue (hard to imagine, right?) or the Senate Republicans try to do something perceived as denying Christine Blasey Ford her right to be heard, this story could open a political crater beneath the feet of every GOP candidate.

And NH Dem chief Ray Buckley’s hope was always to have Molly Kelly as his nominee, in part to take advantage of his party’s existing advantage among women voters. New Hampshire Democrats are right where they want to be in this race 50 days out.

Having said that, Sununu is still viewed as a favorite for re-election.  At the risk of underestimating her —which we’ve all been repeatedly warned about–Kelly is not a terrific candidate. She’s unsteady on the stump, she’s got a track record on taxes that is easy to exploit, and she has yet to articulate a convincing reason for the record number of working Granite Staters to fire a governor leading one of the best-performing economies in the country.

If, however, the election turns into a referendum on Trump and his party, every Republican is in danger.  The best advice for Gov. Sununu is “Run like you’re losing.” Because thanks to Donald Trump, you could be.