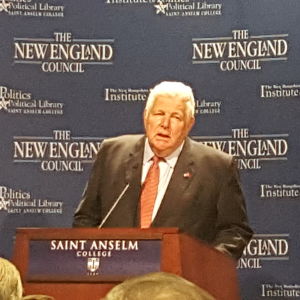 In New Hampshire, a Conservative Case Is Made for Common Core

William Bennett, who served as Secretary of Education under President Ronald Reagan, spoke Thursday in the first-in-the-nation primary state about the hot-button issue of Common Core. While the education standards have been attacked by some of the 2016 Republican contenders, Bennett made the case that the standards are a conservative policy even though the implementation has been flawed.

Bennett detailed the origin of Common Core State Standards, for which he claims to be the godfather. The standards began with an idea of having some common basic texts, such as the Bible and Shakespeare, and a grassroots movement grew out of this idea starting with educators and state governors who believed all students should understand the same elementary concepts of English and math.

Bennett, a popular conservative radio host, seemed to agree with some Common Core critics that the Obama administration went too far in tying federal education funding to adoption of the standards. Bennett told a lunchtime crowd at the New Hampshire Institute of Politics at St. Anselm College that he would be fine with dropping the term “Common Core” but that it would be a mistake “to do away with the original understanding, which is a set of standards shared state to state so that we have some idea of how our students are doing.” He encouraged the audience to look at the actual Common Core standards, which he noted cover only basic concepts in English and math, such as converting fractions to percentages and understanding the difference between poetry and prose.

“When states administer their own standards, we have gotten in this country a Lake Wobegon effect, where all the girls are pretty and all the boys are above average,” explained Bennett. “When we then test what our students know, not by a state test but by a national test […] we find students aren’t doing as well as the states say they are.” Bennett warned that the upcoming release of new test scores based on the Common Core will be sobering for many parents, educators, and policymakers.

According to Bennett, low academic standards and poor state testing have put the United States at a disadvantage. “The longer you stay in school in America the further behind you fall from students in other countries,” said Bennett, citing statistics that relative to other industrialized nations, American third graders tend to test in the top third, eighth graders in the top 50 percent, and eleventh graders in the bottom quarter.

The presidential contest may not ultimately matter in the debate over Common Core. The standards are taking hold in states and are gaining popularity. The next president can roll back any federal dollars tied to supporting the implementation, but a vast majority of the states have adopted the standards. States that have tried to write their own standards that differ from Common Core have found that to be nearly impossible. And while firebrand Texas Sen. Ted Cruz claims he would “repeal every word of Common Core,” critics note any effort by a president to tell states to drop the standards would seem to be the same federal overreach that conservatives currently protest.

In the lead up to the February 9 primary, Common Core is sure to be a popular topic as the state continues its implementation. Test results from the previous academic year are set to be released in November. It remains an open question whether voters will see the expected drop in scores as a reason to abandon their adoption or push forward with the higher standards.