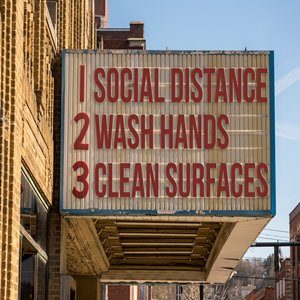 In the U.S., Adapting to a New Normal

WASHINGTON — Americans are rapidly waking up to the full impact of the coronavirus and acting seriously to keep it from spreading.

The American response has come only after President Trump initially said the virus was not all that serious and urged people not to panic.

In that sense, Trump is following the example of Chinese authorities and then South Korea’s President Moon Jae-in. It was only after the disease broke out in mass numbers first in China and then in South Korea, also Italy and Iran, that leaders anywhere suddenly reversed themselves and adopted “emergency measures” to counter it.

In Washington, we’re getting the same type advice as everywhere, but the size and diversity of the United States add up to considerable differences. As in other countries, sports events are postponed, canceled or played before rows of empty seats in arenas and stadiums to which no spectators are admitted. And most theaters are closed, including every theater in the Broadway district in New York.

For me that’s a major disappointment since I had hoped to watch the opening games of the American baseball season, including those played by my beloved Baltimore Orioles, who have finished last for the past two seasons, and the miracle Washington Nationals, who won the World Series last year.

Appropriately, I don an Orioles’ hat and shirt for games in Baltimore and Nationals’ hat and shirt for games in Washington. Nope, I don’t buy this stuff — all giveaways at games. Having gone to the Nationals’ victory parade after the World Series, I feel I have a stake in their future. (Yes, I must confess I did pick up a couple of their World Series hats and shirts last year along the parade route for $10 each, a fraction of the rip-off rates in their stadium shop.)

And I had had every intention of going to New York and catching two or three Broadway musicals, my super-favorite form of entertainment even if I don’t think current shows are anything like those I used to watch long ago. When was the last time anyone walked out of the theater after a current show, not a revival, remembering a single tune from the show?

The prices of tickets to Broadway shows have risen so high that it’s a serious personal investment to go and see one. Maybe I should count the closure of Broadway theaters as a blessing, at least for me if not for those tourists who pack the theaters and give standing ovations at curtain call for even the worst of shows.

As of now, I’m confined to my desk and home computer in Washington, attempting to follow the rules about hand washing, staying 10 feet away from people in conversation and bowing politely rather than shaking hands by way of saying hello and goodbye.

In that practice, incidentally, everyone I’ve ever met in Asia has the right idea. From Japan to Korea and China, South and Southeast Asia too, bowing is the normal form of greeting. Yes, people from all these countries often do shake hands with foreigners just to be courteous, but really there’s no point in getting your hands slightly dirty or contaminated thanks to the bad habits of others.

I would hope the practice of bowing instead of shaking hands would endure after the coronavirus has faded into history and we’ve begun to worry about whatever killer disease is coming next. There’s a good side to everything.

Shutting down theaters and postponing baseball games, however, is far from the only disappointment. Every day I get a notice that a panel or seminar or speech that I had signed up to attend is not going to happen.

Flights that I had planned have been canceled, and tours in distant lands are postponed. People whom I know are finding they can just as easily work from home as go to the office, something I had discovered long ago as a journalist.

It’s as though life here has come to a screeching halt, and you wonder how long the country can endure in this state of suspended animation.

As for the real danger of this dread disease, if you look at the percentage of people who’ve contracted the virus, aren’t the chances pretty low? Statistically, it’s a whole lot easier to get into a serious car accident on one of the interstate highways than to catch the bug.

The big difference between the United States and Asian countries is you see almost nobody here covering mouth and nose with a face mask. I wonder when we’ll start taking the disease seriously enough to begin wearing them.

It would be a big mistake to minimize the risks. As the history of the disease in Korea, China, Japan and elsewhere has proven, it can flare up anywhere, any time.

Shrugging off the menace would be hubris in the extreme.