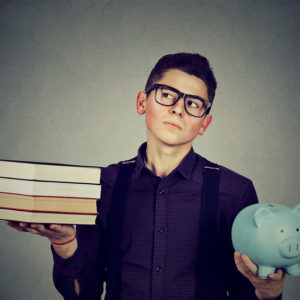 In Wake of ‘Side Door’ College Admissions Scandal, Americans Ask: Is College Worth It?

“I created a side door that guaranteed families to get in.” — William “Rick” Singer, who pled guilty to racketeering charges in the college admissions scandal.

Is college worth it?

For example, one couple allegedly paid Singer more than $1.2 million in bribes to get a student into Yale University.  That number sounds outrageous. But for students who attend Yale legitimately, a four-year degree will cost more than $300,000 in tuition and fees.

For many American families, that number sounds just as outrageous.

A year in the Ivies will cost the average student almost $55,000 this year. For four-year private colleges more broadly, it’s around $36,000.  Even at public colleges, average in-state tuition and fees have reached $10,000 a year.

Meanwhile, parents and students have heard all the horror stories: Graduates with tens — or even hundreds — of thousands of dollars in student debt, stuck working as a waiter or receptionist as their bachelor’s degree in art or literature hangs on the wall of their parent’s basement.

Right above their beds.

Some of those stories are true — the graduate of Harvard’s theater program with $75,000 in student debt working as a dog walker springs to mind — but these anecdotes, however frightening, are the exceptions. According to the College Board, 59 percent of graduates with bachelor’s degree recipients in 2017 had loans, and their debt averaged $28,500. Not cheap, but not fiscally-crippling, either.

The question is whether the culture of America has become so obsessed over college degrees that, in their bizarre, photo-shopped-sports-pictures way, TV stars Lori Loughlin and Felicity Huffman were right in the college admissions scandal were right.

Part of the issue is cultural, argues Timothy P. Carney in his new book Alienated America. His thesis is that, as community institutions that once provided economic and social networking opportunities have waned — churches, community organizations, etc. — colleges have taken their place.

“As American society increasingly segregates into the elites and the outsiders, parents are doing crazy things to ensure their kids end up on the right side of that divide. In a healthier society, with less sorting and segregation by class, the stakes wouldn’t be as high,” Carney tells InsideSources.

Professor Alan Benson of the Department of Work and Organizations at the University of Minnesota goes even farther. “These parents are responding to the incentives of the cultural marketplace. There is a stigma with not attending college, and they want to avoid that stigma. And now it’s not just ‘attend college,’ but attending a high-status college like Yale or Georgetown.

So are these parents, however corrupt they may be, also correct? Is getting into a high-status college worth any price?

No, says Bryan Caplan, Professor of Economics at George Mason University. He tells InsideSources his research shows that “as a purely fiscal matter, an education at an expensive Ivy League college probably isn’t worth it.”

“And if you’re paying a $1 million bribe just to get in, it’s almost certainly not.”

Caplan, author of the book The Case Against College, isn’t arguing against the value of college, but rather the comparable value of a wildly-expensive Ivy League education versus a quality state college at a far lower cost.

“The question is how much additional benefit does a student get from the more expensive school?  A bit, perhaps. If you’re an outstanding student from a low-income family who can attend on a scholarship, it’s definitely a great value. The prestige and the doors it can open are valuable.

“But if you’re a quality student from a well-off family who pays full freight, the additional costs may not pay off,” Caplan says.

Brad Hershbein doesn’t agree. A senior economist at the W.E. Upjohn Institute for Employment Research, Hershbein’s has also done extensive research, and he insists that college is absolutely worth it “for the vast majority of people who go, and even for people who don’t go.”

“If you look at your career over a lifetime, the benefits that accrue for someone who goes to college – and specifically because they go to college — vastly outweigh the costs,” Hershbien says.  “And that’s true even if it takes you six or seven years to finish; and it’s true, even if you don’t go to a selective university;  in fact, for some people, it’s still true even if you don’t finish college.”

As with Professor Caplan, Hershbein’s analysis is a matter of comparison: Is college worth it as opposed to simply graduating from high school and entering the job market. But what about people who spend lots of money on “soft” degrees in the arts, as opposed to the STEM fields of science, technology, engineering and math? Does college pay off for them?

“Yes,” says Hershbein, who says his research shows that even graduates who majored in the two lowest-paying college majors – drama and early childhood education – “make more money over their lifetime than high school graduates or even people with some college.”

But is that a function of college, or what economists call “educational signaling” — revealing the innate intelligence and ambition of the people who can get into school (assuming there were no bribes) and do the work to complete the degree?

According to Caplan, the data indicate that character counts. “The labor market doesn’t pay you for the useless subjects you master; it pays you for the preexisting traits you signal by mastering them.”

“We’ve studied the data on kids from the same family — the same wealth, the same parents’ education level — and we found that the sibling who was a good student tended to get a much better job and earn more money,” Caplan told InsideSources.

So how much of the additional earnings of college graduates is the education, as opposed to their character? “It’s about 50-50.  About half is education and about half is what they would have achieved anyway,” Caplan says.

Which is why Caplan and other critics of America’s credential-obsessed society suggest we put less focus on college attendance and more focus on acquiring skills that can provide the economic security for young people to build happy, satisfying lives.