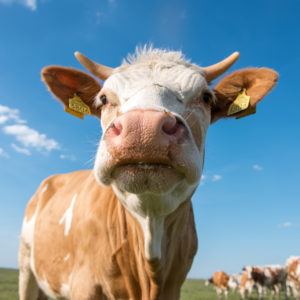 Who is to blame for increased methane levels in the earth’s atmosphere: humans, or cows? For years, the question was posed tongue in cheek by skeptics of human-caused global warming. Methane is a hydrocarbon, which, at room temperature and normal pressure, appears as a colorless, odorless gas. It is also the main component of natural gas. In recent years, atmospheric methane levels have become a concern for environmentalists, who note that global methane levels have increased from roughly 1750 parts per billion in the early 2000s to 1830 parts per billion today. A new study claims to have found the source of the missing methane emissions: cows.

“Our results suggest that livestock methane emissions, while not the dominant overall source of global methane emissions, may be a major contributor to the observed annual emissions increases over the 2000s to 2010s,” conclude researchers in a new study published by Carbon Balance and Management, an academic journal.

The new study reevaluates estimates of the methane emissions produced by livestock in the U.S., finding that previous studies had underestimated these emissions by as much as 11 percent. Even more curiously, the researchers found that the largest increases in livestock methane emissions were in the northern tropics. The results of the study have the potential to impact how environmentalists and policy-makers treat agriculture when dealing with the problem of greenhouse gases.

The study used data from the U.S. EPA when considering the impacts of livestock raised around the world. As a result, it is one of the most comprehensive studies of the impact of livestock on global warming done to date.

The study showed that livestock played a large role in the increased methane levels observed recently. Cattle and other ruminants that break down food in the first of four stomachs, naturally produce methane as a product of digestion. While this has long been understood as a fact of biology, its impact on the environment has not been so fully studied. Increased consumption of meat in China and other parts of the world has increased the impact of methane emissions from livestock.

Using data from 2006 Intergovernmental Panel on Climate Change report, the researchers found that the report failed to account for changes in livestock breeding and management. In recent years, cattle have been bred to be larger and also, manure has been stored in open pits, which release methane into the air as they decay. Accounting for these two changes, global estimated emissions from livestock digestion went up 8.4 percent, while estimates for manure management went up 36.7 percent.

Methane has been a focus for environmentalists in recent years, after studies showed that atmospheric levels were increasing. Methane is released both by cows themselves and also by fermenting piles of manure, which release the gas as part of their natural decay process. Although the gas is naturally occurring, environmentalists are concerned about methane levels, believing the gas to be 25 times more potent as a warmer than carbon dioxide.

The study has the potential to significantly alter major industries in the U.S. For oil companies, methane is serious business. The gas is often found alongside deposits of oil. In many areas, these pockets of natural gas had been deemed not economically feasible to extract. As a result, for years, many companies had vented, or released, this methane into the atmosphere at drill sites. Since it remained unregulated, and therefore, unmeasured, the full impact of this practice was never realized.

The Obama administration attempted to clamp down on the practice through a rule that would curb the “wasteful release of natural gas” from wells operating on public and Native American lands. The oil industry complained about the decision, saying that it would increase production prices. After the inauguration, the Trump administration has since tried to repeal this rule but encountered resistance from Congress.