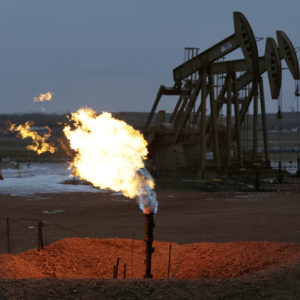 How far does an executive agency’s regulatory authority extend? When it comes into conflict with a Senate vote, whose authority prevails? These are knotty questions of constitutional law currently playing out over the topic of the methane rule. The debate pits the Trump administration, which supports domestic energy exploration, especially fossil fuel drilling, against figures in Congress who fear the effects of unregulated emissions of methane gas.

Methane is a hydrocarbon, which, at room temperature and normal pressure, appears as a colorless, odorless gas. It is also the main component of natural gas. Although the gas is naturally occurring, environmentalists are concerned about methane levels, believing the gas to be 25 times more potent as a warmer than carbon dioxide.

Although methane is a fuel in its own right, for oil drillers, it frequently becomes a nuisance. Pockets of natural gas found near oil deposits are often not worth the price of extraction. As a result, many extraction companies flare off the excess methane, either releasing it into the atmosphere or burning it away. This process saved money for the oil and gas industry but was long the bane of environmentalist groups.

In November 2016, then-Secretary of the Interior Sally Jewell announced the Methane and Waste Prevention Rule to curb the “wasteful release of natural gas” from wells operating on public and Native American lands. The rule mandated that oil and gas companies phase in technological improvements to gradually cut methane emissions in half, as part of a larger goal of reducing methane emissions by 40-45 percent by 2025.

The rule was praised by environmentalists, who noted that the process of venting methane into the atmosphere effectively nullified any emissions benefits the U.S. gained through the use of coal-fired, rather than natural gas-powered power plants. Methane venting had previously been unregulated, and, as an effect of this, unmeasured. Scientists studying climate change, however, discovered that U.S. atmospheric emissions of methane were at least 30 percent higher than EPA records would indicate.

By measuring atmospheric levels, they discovered that methane levels had in fact grown by more than 30 percent between 2002 and 2014. The Obama-era methane rule was an attempt to better regulate methane emissions into the atmosphere, with the hope of gradually lowering them over time. At present, state governments take different approaches to methane emissions. Some, like Colorado, have enacted strict legislation to curb methane emissions. Meanwhile, others, like New Mexico, have taken a laxer approach.

The different legislative approaches have resulted in differing effects. Over the past six months, $13 billion has been invested in the Permian Basin between southern New Mexico and Texas. Additionally, methane emissions in New Mexico have increased by 0.6 million tons per year, or 38 percent, between 2011 and 2015. Meanwhile, collective methane emissions have dropped by 1.5 million tons per year in Colorado over the same time period.

For state governments, energy exploration means increased revenues in the form of increased leases and taxes. While many states wish to encourage exploration, requiring that methane emissions be measured, monitored, and limited means that more of them will fall under state taxing authority.

During the beginning of the Trump administration, Congress used the Congressional Review Act to overturn several administrative policy actions deemed to be onerous or burdensome. The methane rule was considered and came up for a Senate vote under the same process. Unlike the others, it failed to pass.

In April, 51 senators voted against moving forward with legislation to overturn the methane rule, putting a roadblock into the Trump administration’s plans. Despite the legislative setback, administration figures promised to move forward with policies to both promote development and limit emissions.

Despite the congressional stay, the EPA has continued to pursue means of quashing the methane rule. In early May, the agency issued a rule to limit emissions from new oil and natural gas operators while requiring operators to submit to quarterly and semi-annual monitoring.

At the end of May, the EPA, under Administrator Scott Pruitt, placed a 90-day stay on portions of the Obama-era methane rule, giving energy companies an additional three months to come into compliance with the rule. The EPA wanted to allow time for industry players to comment on the effects of the rule. This sparked a controversy that has been burning between the EPA, the administration, and Congress ever since.

Various environmental groups have challenged the ruling in court, attempting to force the administration to return to the previous methane rule. They argue that the Senate vote effectively created the rule and allowing comments after the fact was nonsensical. In late June, Sen. Tom Udall, D-N.M., and Sen. Maria Cantwell, D-Wash., wrote to Interior Secretary Ryan Zinke criticizing his decision to stay the methane rule on federal lands. In the letter, the senators said that they were “troubled” by the decision, which they said was “brazen” in light of the previous Senate vote.

The senators expressed their opinion that attempts to stay the methane rule in court are unlikely to succeed. So far, this seems to be the case.

On July 3, the U.S. Court of Appeals for the D.C. Circuit ruled that Pruitt’s stay was illegal, ruling that an extensive delay of the rule had the same effect as repealing it outright.

“EPA’s stay, in other words, is essentially an order delaying the rule’s effective date, and this court has held that such orders are tantamount to amending or revoking a rule,” wrote the court in its decision.

The controversy exposes some of the limitations to executive authority. Although President Donald Trump may wish to enact policies that foster growth in the energy sector, his authority to direct administrative agencies without specific authority from Congress is limited.

On Friday, the U.S. Court of Appeals for the D.C. Circuit issued a one paragraph ruling announcing a limited stay of the mandate. The ruling gives the EPA two weeks to determine how it would like to proceed with the lawsuit. The EPA has stated that it is using the time to consider its options and weigh the merits of continuing to pursue the lawsuit. Even though, thus far, the administration has fought to allow the repeal of the methane rule, it is beginning to seem as though its options have been played out. Despite the president’s stated desire to encourage domestic energy development, in the face of Congressional limitations, it lacks the ability to make such rules.