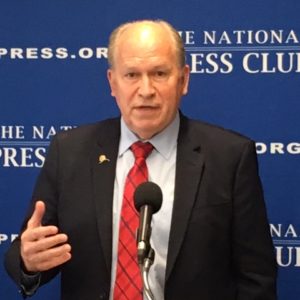 Just as Governor Bill Walker, I-Alaska, was capping off a surprisingly strong campaign with a victory in 2014, his state was slipping into a worst-case financial situation. Global oil prices were suddenly in free-fall, and energy-rich Alaska, which does not collect any income taxes, property taxes, or sales taxes from its residents, was suddenly facing billions in deficits. Managing the shortfall has been a tall order—the state has had to make deep cuts in spending and has reached far into its savings. A few weeks ago, the governor signed a compromise bill that narrowly avoided a state government shutdown.

According to Walker, who was in Washington D.C. on Wednesday at an event sponsored by The Centrist Project at the National Press Club, being unaffiliated to either major party has made his difficult job a little bit easier. A former Republican, Walker decided to run as an Independent, and eventually swept into Juneau on the strength of a unity ticket formed with the top-Democrat in the race, now Lieutenant Governor Byron Mallott. Because he doesn’t have to hew to a party line, Walker said that he feels empowered to wear an “Alaska uniform” and stake out positions that he believes are right for his constituents. For example, the governor has pushed for a modest income tax and has opposed the construction of the Pebble Mine for environmental reasons, while at the same time he is a strong supporter of gun-rights and is considered to be relatively friendly to the energy industry.

In an exclusive interview with InsideSources that followed The Centrist Project briefing, Walker described his motivations for running as an Independent and the challenges his state is currently facing. Significantly, Walker is not the state’s first governor to be elected from outside the two-party system. The man that Walker credits for convincing him to run for the state’s top office, the late former Governor Wally Hickel, served a second term in Juneau as a member of the Alaska Independence Party from 1990 to 1994. Walker, who unlike Hickel is a non-party Independent, said that Hickel was a “mentor” to him.

While the Alaska Independence Party’s influence has waned, the state’s politics maintains an Independent streak. Recently, the election of a series of unaffiliated candidates in down-ballot races, including state representative Jason Grenn (who was also present at the Washington event), denied the majority to either major party in the state’s House of Representatives. (Republicans still hold a strong majority in the upper house of the legislature, however). As a result of a compromise ironed out by Grenn and his colleagues, moderate Republicans, Independents, and some Democrats have come together to form a centrist coalition to lead the lower house that is facing down the more conservative state Senate in the state’s high-stakes fiscal negotiations.

Though running without a major party’s support was a challenge, Walker said that navigating Alaska’s hard times as an Independent “actually helps me. It helps me because some party platforms say ‘no taxes whatsoever… we don’t want any taxes at all.’ How are you going to pay for stuff if you don’t have some way to raise revenue? So it allows me to pull from both sides, as far as how we do things.”

Walker also indicated that his lack of affiliation can actually be good, at times, for members of one or the other political party, that may not always agree with the positions he takes. He explained, for example, that he can call for some modest revenue increases without risking the ire of down-ballot Republicans that may otherwise fear being tied to his positions. “The options are wide-open for me,” said the governor.

There do appear to be limits to Walker’s free hand as an Independent, however. The Governor is 10 points underwater in some approval polls in a state that President Trump carried by nearly 15 points in the 2016 general election. Perhaps as a result, when asked about the growing scandal in Washington over the latest revelations of the Trump campaign’s ties to high-profile Russians, Walker neither rushed to Trump’s defense, nor questioned the judgment of senior administration officials.

Instead, Walker, who never endorsed a presidential candidate but does sit on the President’s Council of Governors, appears to be navigating the same tightrope that vulnerable national Republicans are balancing on: “My whole focus is on fixing Alaska. We don’t ignore what’s happening in Washington, obviously, when Washington has such a big influence on our state in many ways, but I don’t embroil myself in some of those issues just because I don’t have the bandwidth. Our whole thing is how do we fix Alaska from a financial standpoint, and I stay laser-focused on that.”