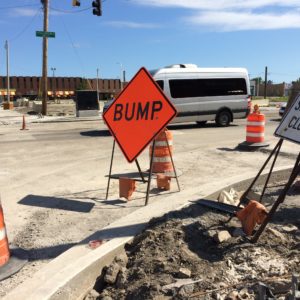 What Small Businesses Think of the Infrastructure Crisis

Lawmakers heard from industry groups during a hearing Wednesday to examine how small businesses view the infrastructure crisis.

The House Small Business Committee held the hearing with lawmakers looking to address severe issues facing the national infrastructure system. The hearing explored the challenges that small businesses are facing as a result, and how they could be addressed, with a specific focus on surface transportation and access to broadband.

There has been a growing concern over the crumbling roadways, bridge collapses, and failing pipes in our national infrastructure system. The problem impacts both families and businesses across the country, but there is hope with lawmakers looking to address it.

“Our nation faces an infrastructure investment deficit of $2 trillion over the next 10 years,” Marsia Geldert-Murphey, the chief operating officer at W. James Taylor, Inc., said during the hearing. “The investment gap has led to deficient roads and bridges, water main breaks, inadequate ports and inland waterways, late flights, and so much more. Failing to close this infrastructure investment gap brings serious economic uncertainty for small businesses.”

Geldert-Murphey testified on behalf of the American Society of Civil Engineers. The hearing included speakers from several industry groups which represent small businesses in construction, engineering, and other sectors needed to improve infrastructure. Kevin Beyer spoke on behalf of The Rural Broadband Association.

“There appears to be a widespread consensus that broadband is essential infrastructure, and critical to life in modern American,” Beyer, who also works as the general manager for Farmers Mutual Telephone Company, said. “The public policy question that remains is how to best ensure that the service is available, affordable, sufficient, and sustainable in high-cost rural areas that don’t attract private investments on their own.”

The American Society of Civil Engineers released a review of the national infrastructure system which rated it at a D+ for last year. The U.S. Department of Transportation found in a report Feb. 13 that there is a $90 billion backlog in transit repair needs. Geldert-Murphey adds that if the problems are not addressed the economy is projected to lose $4 trillion in growth by 2025.

“Our nation is at a crossroads,” Geldert-Murphey said. “Languishing infrastructure impedes our ability to compete in the global economy which provides meaningful opportunities for small businesses. We need to increase our federal investment to address the national infrastructure deficit, to achieve the economic conditions needed for the 21st century.”

President Donald Trump has proposed a $1.5 trillion project to update and fix the national infrastructure  and create jobs. The plan would involve $200 billion in federal funds alongside investments from the private-sector and local governments. The plan seeks to modernize and fix roads, bridges, tunnels, and airports, among other things.

“We applaud the administration for focusing on increased infrastructure investments,” Bill Schmitz, who spoke on behalf of the National Stone, Sand, and Gravel Association, said. “However, we need the funding from the federal government to be more robust, routine, and reliable if we are to truly fix our infrastructure woes. Infrastructure projects help to create jobs and allow for the movement of goods that are essential to the American way of life.”

The White House also sees the infrastructure plan as a potential jobs stimulus program. Construction and other workers will be needed for those projects which could help them to build their careers by gaining more experience and an improved skill set.

There have been several national stories in recent years which have highlighted severe infrastructure problems across the country. There have been train derailments, bridge collapses, and other issues that have been attracted national attention. Flint, Michigan, made headlines when its drinking water became contaminated with lead from aging pipes.