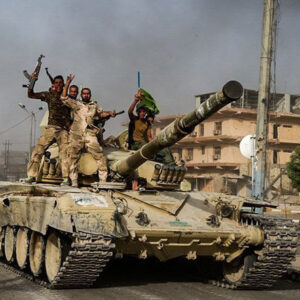 Members of Iranian-backed militias celebrate the taking of Fallujah from ISIS in June, 2016. (Wikipedia)
News

Inside the Threat Posed to U.S. by Iran-Backed Militias in Iraq

Nestled in a seemingly non-descript private home in Baghdad, scores of Iraqi militiamen piled into a dark living room – some lined their weapons up by the wall, others sat close beside them. Some wore battle fatigues and others donned suits and ties.

But in between puffs of cigarettes, almost all talked about their loyalty to Tehran, their desire to spread their skills into neighboring Syria on behalf of the murderous Bashar al-Assad regime, their insistence that the U.S. must leave Iraq in its entirety. Many even been boasted about slaying American troops following the American invasion of 2003.

That meeting took place in the twilight in 2017, just months after the militias – formally known as the Popular Mobilization Forces (PMF) played a critical role in territorially defeating ISIS from Iraq. Yet it also symbolized that the enemy of your enemy is not your friend. Since then, the number of PMF members has expanded well beyond the initial 100,000. There are many more splinter groups, many have gone rouge – and Baghdad has little control.

So how much of a threat do these Iran-devoted militias now pose to the United States?

“While these militias currently do not pose a direct threat to the U.S. homeland, they are a major threat to our interests in the region as well as our diplomats, troops, and Americans visiting the region,” explained Kamran Bokhari, director of analytical development at the Newlines Institute. “They are the main instrument through which Iran is trying to alter the regional security architecture.”

Despite being desperately brought officially into Baghdad’s payroll after ISIS took over large chunks of the blood-splattered country in 2014, these militias are not new. Since 1979, the religious regime in Iran has funded and fortified a web of dutiful, well-armed outfits – playing into the folds of Shia sectarian loyalty – in much of the Middle East. The Iraq factions were commanded by Maj. Gen. Qassam Soleimani, the shadowy leader of Iran’s elite Quds Force, until he was killed alongside militia chief Abu Mahdi al-Muhandis in a U.S. drone strike in early 2020.

A number of militiamen are still seeking revenge on the U.S. for those deaths – characterized by an uptick of more than 40 attacks against U.S. infrastructure in just the first quarter of this year. A spate of assaults prompted President Biden on February 25 to greenlight an airstrike against some factions operating near the Iraq/Syria border.

Nonetheless, the militias continue to make it very clear that their sights are set on driving America out of the country, making it easier for them to implant Iran’s agenda through all aspects of Iraq society. And the goal of the militias is multi-pronged: it is not just about military prowess.

They are mottled throughout almost all of Iraq’s most powerful institutions, from the economy and education to religion and security. They organize demonstrations and wage war against political rivals, assassinate journalists, academics, and rights advocates. They blow up liquor stores and decimate beauty and grooming salons in line with Iran’s vision of what is “haram.”

“The militias want to infiltrate Iraq so they can corrupt the government and serve Iran’s interests. Iran uses them to dial up the pressure (against the U.S.) when they wish,” said Daniel Hoffman, a retired CIA station chief, and a senior executive Clandestine Services officer. “But the militias also want to make money, gain power and control. They are happy to do Iran’s bidding for their own selfish interests too. And Iran wants the U.S. out to control Iraq.”

The approach in containing the militia groups while attempting to restore the Iran Nuclear Deal, forging close ties with Baghdad, and ensuring the safety of American interests and personnel in the region is poised to be a challenging one for the White House.

But it seems the militias are on track to meet their desires, with the U.S. ready to bow out.

Last week, the U.S and Iraq agreed to withdraw the 2,500 remaining American combat forces – under the guise that the Iraqi Security Forces are capable of protecting their own country. The pullout timetable is yet to be determined. So, as U.S. troops steadily decline in the unsteady aftermath of the ISIS defeat, Iran’s heavy hand is only getting stronger, and Iraq is resembling more and more a rogue state rife with dissident power players.

“These militias work in concert with Iraqi political groups to influence and control the political system as they’re able. They also conduct operations against the U.S as instruments of Iranian policy unrelated to Iran,” added Matthew Schmidt, a national security professor at the University of New Haven. “In this way, they are fluid in their goals and allegiances.”