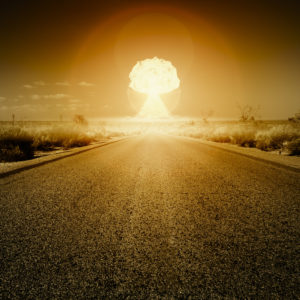 The United States can experience a nuclear attack, where no one feels a shock wave; no radiation; no heat blast; no neutron bombardment; no biological or chemical impact, yet in one year, up to 90 percent of the U.S. population would be dead.

Congress can prevent this catastrophe from happening, but they’ve been dragging their feet.

For me the realization of what could be started in 1955 at Nevada’s Indian Springs Air Force Base, next to Yucca Flats, the U.S. atomic bomb tests site. I was already seven miles from ground zero and saw the power of an atomic blast.

Later, I was located 20 miles from the blast site, with a swath of mountains protecting me. When the nuclear detonation occurred, suddenly, the power generators at the base started to grind to a halt. This was later to be dubbed an ElectroMagnetic Pulse (EMP), which demagnetized the generators. That seemingly strange occurrence went into the back of my mind until recently.

When we think of North Korea, Iran and other rogue states, we tend to think in terms of conventional atomic weapons; that’s 1990s thinking. Today’s weapons would have been thought of as science fiction; unfortunately, science fiction can quickly become reality.

The EMP pulse I recognized years ago acts very differently when exploded at an altitude of 200 to 300 miles. Strange things happen; it morphs into, as science-fiction writers would say, a death ray. Three different electric and electromagnetic fields are generated. Those fields extend to the visual horizon, 1,500 miles. Together they produce damaging high voltages: destroying electronic equipment; shutting-down transportation; infrastructures; medical and financial systems; and inducing high-voltage surges in power transmission lines, destroying the power grid.

On July 9, 1962, the U.S. detonated a nuclear weapon, “Starfish Prime,” at an altitude of 250 miles. This caused damage in Hawaii, 898 miles away, knocking off streetlights, setting-off burglar alarms and damaging telephone company equipment. Then, everything ran on “Vacuum Tubes,” today it’s “Semiconductors,” orders of magnitude more sensitive and easily destroyed.

Exploded over Kansas, it would affect all the continental United States. The electric power utilities involve 5,800 major power plants and 450,000 miles of high-voltage transmission lines. These are monitored and controlled by a mix of devices installed over decades — all vulnerable to an EMP attack. Just imagine the impact in the dead of winter!

Expert Peter Pry, a former CIA analyst and executive director of the Congressional EMP Commission, quoted the conclusions from their public reports, “Within 12 months after an EMP attack or a massive solar flare as corroborated by Dr. Michio Kaku, professor of theoretical physics at New York University and noted author, between two-thirds to 90 percent of the U.S. population would perish.”

Our society depends upon electricity. Without it, food production, sanitation, transportation — all of our necessities — would become affected. In reality, it means killing people the old-fashioned way; freezing; starvation; disease and social collapse.

In 2014, Pry indicated North Korea apparently practiced an EMP attack with its KSM-3 satellite. A minor EMP wave passed over the U.S. heartland, including the Washington-New York City corridor. In 2015, the Washington Examiner reported that Iranian military documents described a plan for a nuclear EMP attack against the United States.

There are at least two societies bent on killing us. They don’t have to lob missiles at our cities, just bring a satellite out of orbit containing a nuclear device. The EMP Commission recommended spending between $10 billion to $20 billion over the next five years to protect giant power transformers and transmission lines, which otherwise would simply melt down in the event of an EMP attack or a massive solar flare.

Does our government know about this issue? Of course it does. Is it taking preventive measures against such an attack? A 2010 bill, known as the “Grid Act,” was stripped of its main elements by Sen. Lisa Murkowski, R-Alaska, after the House of Representatives passed it by a unanimous vote. It was designed to protect 300 giant power systems around the country.

A new bill, a watered-down version of the “Grid Act,” still languishes in Washington. Considering it takes about five years to protect the power grid — our country is at serious risk and is not a problem that can be dealt with later.

Time marches on. What is our government thinking or not thinking?