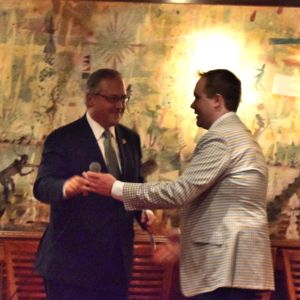 Iowa Congressman Urges Action on ‘No Budget, No Pay’

Congress has lost the trust of the American people, and must be willing to take dramatic steps to win it back, said Rep. David Young, R-Iowa, at an event hosted by InsideSources on Wednesday.

“The American people put their trust in us to balance the federal budget, protect our borders, and make it easier to support a family. Unfortunately we haven’t been doing that for years, and only a serious reform like ‘No Budget, No Pay’ can begin to build back this trust,” stated Young.

He was referring to a House bill known as “No Budget, No Pay,” which would withhold legislators’ paychecks if a budget isn’t passed by April 15 of each year, which is the date by which Congress is mandated to pass a budget. Young, a first-term member of Congress representing southwest Iowa, is a lead sponsor of the legislation.

Young, for his part, has voluntarily had his pay withheld under the exact rules of the bill even though Congress has not passed it. He has not received a paycheck since April 16.

Perhaps it is unsurprising the legislation has not passed. Congress has declined to pass a budget since 2009, relying mostly on continuing resolutions and other budgetary shortcuts to fund the federal government. Young says this is bad budgetary policy that hurts American taxpayers.

“You can’t balance a budget or make long-term plans without a roadmap, but Congress has been doing it this way for half a decade. You certainly can’t climb your way out of an $18 trillion hole without a plan, which sets us all up for higher taxes and slower economic growth in the future,” Young tells InsideSources.

Young’s work on this issue has earned him praise from the non-partisan No Labels, which has made No Budget, No Pay a priority. Even a liberal columnist for his hometown newspaper has voiced support for Young’s efforts.

“Passing a budget is one of the most basic responsibilities of Congress,” the Des Moines Register’s Kathie Obradovich said. “The government ends up wasting money when Congress simply kicks the can down the road with continuing spending resolutions.”

Obradovich notes that Young’s refusal of a paycheck is “mostly symbolic” because under current law Young will be forced to accept a paycheck at the end of the Congressional session. But she explains Young “has a serious point,” and concludes, “[I]f they won’t work, why should we pay them?”