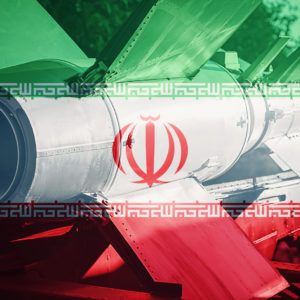 Secretary of State Mike Pompeo informed the public Saturday that the Iranian government tested a medium-range ballistic missile. If what Pompeo says is true, such a test is a direct violation of U.N. sanctions while additionally serving as a heavy-fisted protest to economic sanctions levied by the U.S. government to curtail Iran’s development of such weapons.

“The Iranian regime has just test-fired a medium-range ballistic missile that is capable of carrying multiple warheads. The missile has a range that allows it to strike parts of Europe and anywhere in the Middle East,” Pompeo said via a statement from the State Department.

This latest development in the continued diplomatic row between the United States and the Islamic Republic of Iran could serve as a turning point in the overall success of economic sanctions. President Donald Trump has openly called out Iran as a force of evil in the international community. As a result of Trump’s withdrawal from the Joint Comprehensive Plan of Action (JCPOA) of 2015 (a.k.a. the Iran nuclear deal), the administration’s play to reinstate sanctions on the Iranian regime could be a significant error.

Keep in mind that the Iran nuclear deal, brokered by former President Barack Obama under a legal executive agreement action, was an internationally accepted arrangement that added a degree of assurance regarding Iran’s efforts in holding off on the development of nuclear weapons and other related ordinance.

Under the Iran nuclear deal, the U.N. Security Council’s Permanent 5 members (China, Russia, France, the United Kingdom, and the United States) and Germany (the P5+1), were able to broker a significant arms control agreement with rogue Iran. These controls included 10- to 15-year control periods covering everything from centrifuge development to how much low-enriched uranium Iran can possess for the development of nuclear weapons. Trump, however, dismantled his predecessor’s benchmark foreign policy initiative as a means to come across as a potent force against the Iranians. This also occurred even though Iran was fully compliant with the rules and regulations of the JCPOA three years in a row.

“U.S. President Donald J. Trump’s decision to withdraw from the Iran nuclear agreement and reimpose sanctions jeopardizes the landmark arms control agreement, under which Iran dismantled much of its nuclear program and international inspectors gained extensive access to monitor its compliance,” Zachary Laub of the Council on Foreign Relations wrote in May of this year.

In turn, Trump’s unilateral withdrawal from the Iran nuclear deal was a calculation that he thought could bully Iran into behaving better on the international stage. To do that, harsh economic sanctions were set in place earlier in November 2018.

Historically, economic sanctions as a deterrence have very little success. Granted, there are exceptions. Overall, the history of sanctions remains mixed, nonetheless.

I believe that the president’s withdrawal from the Iran nuclear deal with his consequential reinstatement of broad and targeted economic sanctions was a “poke at the bear” we can’t afford. But, what proof do I have to make such a claim? The test of a medium ranged ballistic missile is exhibit ‘A.’

When economic sanctions are forced on a target country, they don’t necessarily guarantee compliance. As Cato Institute’s John Glaser wrote for The National Interest, “Sanctions have a generally poor track record of actually changing the behavior of the target state in the direction desired by the sanctioning country.” As a result of this truth, sanctioned states typically find means to compensate for the loss of economic fervor and financial capital by going toward illegal and criminal channels.

We’ve seen this case many times when it comes to the discussion of how effective sanctions were on limiting North Korea’s nuclear capabilities.

I’ve investigated how North Korea has been able to get around some economic sanctions by employing slave labor migrant forces abroad, in which, the central government steals foreign earnings. These earnings are then laundered back to the coffers of the central government and are used for whatever purpose. Though this example is indeed anecdotal, the similarities and the questions on the effectiveness of economic sanctions remain.

For example, the International Crisis Group found that economic sanctions forced upon Iran by the American government have a history of failure. The key finding in this report argues that economically strangling Iran will just further the Islamic Republic’s resolve to overcome and remain resilient. The missile test is a glaring example of Iran advancing its resolve and overcoming the challenges placed on the country by Trump’s sanctions. Ultimately, this policy position is counterproductive. The White House must reconsider in order to engage with the Iranians effectively and to ensure a peaceful, equitable and operative resolution.