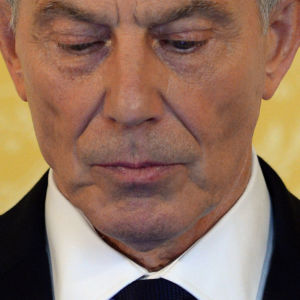 British former Prime Minister Tony Blair holds a press conference at Admiralty House, London, after retired civil servant John Chilcot presented The Iraq Inquiry Report on Wednesday, July 6, 2016. Blair said he takes full responsibility for the decision and that the British military and civil service are not to blame for the problems that developed after the U.S.-led invasion of Iraq in 2003. (Stefan Rousseau/Pool via AP)

Why Iraq Still Defines Political Careers — Especially on the Left

The way this news cycle has unfolded, you’d think it was 2003.

Saddam Hussein’s in the headlines — Donald Trump wants to be him, at least when it comes to fighting terrorism. Plus there’s the blockbuster British study out Wednesday concluding the United Kingdom followed the United States into the Iraq War “on the basis of flawed intelligence that went unchallenged, a shaky legal rationale, inadequate preparation and exaggerated public statements,” according to the New York Times.

The paper’s headline about the Chilcot Report also recalled the politics of the last decade, calling the study a “Devastating Critique of Tony Blair.” In the minds of many, the results of this seven-year government inquiry will cement the war as the defining and damning failure of the former prime minister — that which dimmed the bright light of neo-liberalism who rescued the Labour Party from years out of power and declared, “a new dawn has broken.”

Blair is 63 now, and much closer to the sunset of his public life. He owns his record, and on Wednesday he said he accepts “full responsibility, without exception and without excuse” for his Iraq decision. He gave an emotional press conference, talking of “more sorrow, regret and apology than you may ever know” for the war’s failures. But in the end, he defiantly defended his fundamental call.

“The world was and is, in my judgment, a better place without Saddam Hussein,” he said.

History’s view of that argument will certainly shape its view of Blair, along with George W. Bush, who on Wednesday — his 70th birthday — issued a statement responding to Chilcot through a spokesman. The Guardian quoted the former president’s aide echoing Blair almost word for word: “Bush continues to believe the whole world is better off without Saddam Hussein in power.”

Another senior statesman not backing down.

Of course, liberals won’t shed tears for the Republican’s squandered legacy. They may see Iraq as his greatest sin, but they weren’t exactly rooting for him anyway.

The tragedy of Blair, to the American left and especially its counterparts across the pond, is that he should have known better. Many liberals still fault Hillary Clinton on the same grounds, and her support of the conflict buoyed both Barack Obama in 2008 and, to a lesser extent, Bernie Sanders in this year’s competitive Democratic contest for the White House. The former secretary of state is still atoning for her vote, which feeds broader progressive worries that she’s too much of a foreign policy hawk.

For his part, Trump wants Americans to believe he opposed the war. (He didn’t, initially, though he was an early critic.) Having positioned himself as the least interventionist GOP contender in decades, he clearly wants none of the blame for Bush and Blair.

Neither does Blair’s own Labour Party. Its current leader, Jeremy Corbyn, who is in the midst of a leadership challenge, said Wednesday, “I now apologize sincerely on behalf of my party for the disastrous decision to go to war.”

It’s a decision that won’t soon be forgotten.