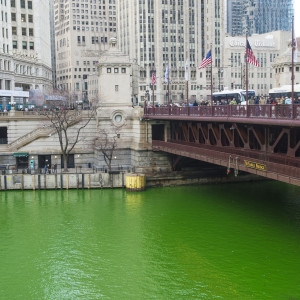 When Ireland’s Pain Was America’s Gain

There will be the “wearing of the green” all over the world come St. Patrick’s Day on March 17. Nowhere more so than in Boston, Chicago and New York. That’s right, not even in Ireland; although they’ve gotten the hang of their own saint’s festival in recent years.

For centuries, until the Americans showed their cousins in Ireland how to party on St. Patrick’s Day, it was a somber, religious feast day.

St. Patrick was what was known as a “Romano-British” missionary, who went to Ireland in the 5th century, and probably in the latter half of the century. We know this from fragments of his own writing. He settled around Armagh, in the north of Ireland, and became the first bishop of Armagh, Primate of Ireland. He described the Irish as “heathen men.”

Myth tells of St. Patrick driving the snakes out of Ireland. But myth has many faces in Ireland, and is part of the charm of the Irish — a charm that has affected the whole world, and stirs people far removed from that small, and at times very troubled island, to wear something green, drink and pay homage.

Not the least of the celebrations this year, as in recent years, will be in London, where so many of the agonies of Ireland had their genesis. The English — and I was born into the British Empire — have treated Ireland savagely down through the centuries. The English reformer Oliver Cromwell wrote of his incursion into Ireland, “God made them as stubble to our swords.” At the battle of Drogheda in 1641, about which Cromwell was writing, the English killed 3,500 Irish patriots. Hard work with broad swords.

William of Orange, the Dutch Protestant ruler who became William III of England, Scotland and Ireland, invaded Ireland on July 1, 1690, to fight massed Catholic forces, led by James II, the deposed Catholic king of England. The two armies faced each other across the River Boyne, just to the north of Dublin. William won the battle, but his victory left a divide between Irish Protestants and Catholics, which exists in modified form to this day.

The “wearing of the green” most likely dates from the uprising of 1798, when the Irish tried to throw off the English yoke with French help, and were soundly defeated by Gen. Charles Cornwallis, who was seething from his defeat in the American Revolution. The Irish, who were rounded up and hanged in groups of 20 a day by some of the English general’s officers, showed their defiance by wearing something green — often a shamrock in their hats. The English considered that an offense: sedition.

Cornwallis also oversaw the formal incorporation of Ireland into Britain. But to his credit, he fought with George III (remember him?) over Catholic emancipation, and for a while resigned his commission.

More horror from England was on the way — and persisted essentially until Irish independence in 1922. During the potato famine (1845-49), England refused to allow relief ships with grain to land in the belief that the famine was part of a natural order, as laid out by the philosopher Thomas Robert Malthus. One million people died as potatoes were their only sustenance.

In this case Ireland’s pain was America’s gain. Hundreds of thousands of Irish fled starvation for a new life in America. This diaspora changed Ireland and America, forever. It is how 50 million Americans claim Irish ancestry.

The Irish in America began to celebrate the national saint of their motherland in their new land — and so was born the St. Patrick’s Day joyous celebration.

To my mind, the final Irish reprisal against England is not the world recognition but that Irish writers, writing in English, not the Irish language, have had such an incalculable effect on English literature. To take a few names at random Beckett, Behan, Goldsmith, Joyce, Shaw, Synge, Swift, Wilde and Yeats.

In Ireland, there is an endless flow of wonderful language. The Irish will never say “yes” or “no” when they can give you a sentence with a flourish, which makes the mundane poetic.

Once in Dingle, my wife asked a waiter: “Is the fish fresh?” He answered, “If it were any fresher, it would be swimming and you wouldn’t want that, would you?”

Also in Dingle, when I asked an elderly man whether the pub he was sitting outside of was open. “He would hardly be open now,” he replied.