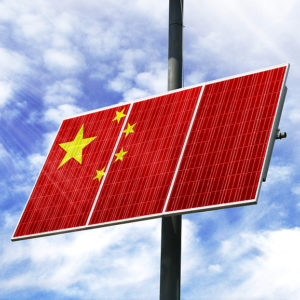 Is Biden’s Energy Policy a ‘Trillion-Dollar Transfer Payment’ to China?

The Biden White House has issued directives addressing “the threat posed by the military-industrial complex of the People’s Republic of China (PRC).” Its national security team lists China as the nation’s top international challenger. In response to the Communist nation’s “ongoing genocide and crimes against humanity,” the Biden administration is imposing a diplomatic boycott of the Olympics in Beijing next year.

Yet against that backdrop, a number of critics and even erstwhile supporters of his Administration have asked why President Biden is pushing green energy politics as part of the Build Back Better plan that would, in their words, amount to “basically a trillion-dollar transfer payment to China?”

At the heart of Biden’s Build Back Better spending plan is a federally-funded push to get Americans to rely more on electricity — particularly electricity generated by wind and solar — than on fossil fuels like natural gas. The problem for the Administration and supporters of expanded deployment of renewable resources is that in today’s marketplace, China dominates the production of solar panels, batteries, and other green energy technology — including products made in the Xinjiang region, location of the forced labor and other practices the diplomatic boycott is protesting.

The Biden administration and the Democratic leadership in Congress play up the domestic jobs they say will be created by the bill’s spending on green energy initiatives. The proposal contains hundreds of millions of dollars in expanded tax credits for solar and wind power, as well as electric vehicle purchases, among other green energy spending. Those are industries dominated by Chinese mining and manufacturing.

According to Bloomberg News, China makes three-fourths of the world’s solar panels. The U.S. produces 1 percent. More than 80 percent of new photovoltaic cell manufacturing capacity is being built in China. The U.S. has added no new cell capacity since 2009.

And China produces 98 percent of the wafers and ingots used in solar panels. It has 227,000 MW of wafer manufacturing capacity; the rest of the world has 18,000 MW combined.

As a result, an American surge in solar panels will by necessity wind up financing Chinese manufacturing.

But China does far more than make the lion’s share of the world’s solar panels. It also dominates the mining and production of materials used in the panels’ construction.

For example, polysilicon, a high-purity form of silicon, is a critical raw material in the solar photovoltaic (PV) supply chain. Since 2017, more than 90 percent of the new polysilicon processing capacity has been built in China.

Roughly half the world’s supply of polysilicon comes from China’s Xinjiang region, where, according to human rights groups and the U.S. and U.K. governments, Uyghur Muslims have been subjected to forced labor, torture, other human rights abuses, and genocide.

Thus through Build Back Better, the U.S. government could wind up funding the very forced labor practices it is protesting by its diplomatic boycott of the winter Olympics.

China also makes 80 percent of the raw materials that are used in advanced lithium-ion batteries, which are used to power electric vehicles as well as cell phones, laptops, and cameras, the federal government’s own Voice of America News reported last year.

Of 136 lithium-ion battery plants planned through 2029, 101 are in China, according to research by London-based firm Benchmark Mineral Intelligence.

American mining companies aren’t happy that so much of Build Back Better’s green energy spending will wind up going to support mining and manufacturing operations in China.

“China is the dominant player in the material supply chains that underpin renewable energy and electric vehicle manufacturing and deployment. We appreciate the Biden administration’s focus on material supply chain challenges. And yet, unless we get serious about reshoring these supply chains and bringing new mines and mineral processing online, we very much risk making Build Back Better and the energy transition a jobs program for Chinese workers,” said Conor Bernstein of the National Mining Association.

Instead of rushing to send potentially hundreds of millions of dollars to China, American mining companies say the government should invest in domestic production.

“Building the infrastructure and energy systems of tomorrow is remarkably minerals intensive,” Bernstein said. “Meeting that surging materials demand requires having mining policy move in lockstep with energy policy, and that simply isn’t happening. We have abundant mineral resources here. What we need is policy to ensure we can produce them and build the secure, reliable supply chains we know we must have.”

And, critics note, the BBB green energy spending is just the beginning as Biden pushes the economy away from the abundant oil and natural gas in the U.S. for years to come.

“If you look at all the taxpayer money for green tech the U.S. will be spending over the next decade or so, the Build Back Better proposal is basically a trillion-dollar transfer payment to China,” said David Williams, president of the Taxpayers Protection Alliance (TPA). Last year, TPA led a coalition of 25 organizations that wrote to Congress opposing the costly wind and solar energy subsidies.

The United States would spend at least $100 billion in the Build Back Better bill to extend the tax subsidies for wind and solar a shocking 25th time since they were first enacted by Congress.

One energy insider who has closely followed the negotiations around the Build Back Better bill noted that the country that would benefit the most from these tax subsidies is also in the midst of also building some 43 new coal power plants which, when completed, would be six times the size of today’s U.S. coal fleet. Leading them to ask if Build Back Better would be better described as “Big Bucks for Beijing?”