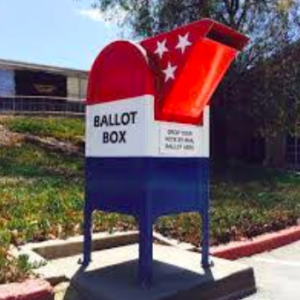 Is It Time for America to Replace the Ballot Box With the Mailbox?

Is it time for America to replace the ballot box with the mailbox?

In the wake of the election-day fiasco in Wisconsin, where horrified Americans watched voters crowd polling places in the midst of a pandemic, there’s a push for all mail-in ballot elections. And not just for the 2020 coronavirus-plagued 2020 cycle, but permanently.

“No one should be forced to choose between their right to vote and their right to stay healthy like the debacle in Wisconsin this week,” former President Barack Obama tweeted, and he wasn’t alone. A new YouGov poll, taken in part on the day of the Wisconsin primary, found that 65 percent of Americans said they support voting by mail. That includes 80 percent of Democrats, 64 percent of independents and 54 percent of Republicans.

Proponents argue that it’s easy and increases access to the electoral process, particularly for members of previously disenfranchised groups. “There is nothing partisan about striving to live up to the promise of our country; making the democracy we all cherish more accessible,” Michelle Obama said this week, announcing that her celebrity-driven organization — When We All Vote — is endorsing federal legislation to allow “no-excuse” absentee balloting.

Easy, convenient, and it encourages turnout. What’s not to like about voting by mail?

Quite a bit, says New Hampshire Secretary of State Bill Gardner, one of the longest-serving election officials in the country.

Gardner, a Democrat, is best known for his aggressive defense of the Granite State’s “First in the Nation” presidential primary. But he’s equally proud of New Hampshire’s record of high voter turnout and hassle-free elections — the latter particularly significant after the Democrats’ disastrous presidential primary in Iowa just eight days before New Hampshire. (The Iowa caucus was so poorly managed, the Associated Press declined to declare a winner.)

While much of the debate over mail-in ballots breaks down along party lines, Gardner’s objections are more practical. For one thing, they aren’t cheap. Preparing for the possibility of a largely mail-in vote this fall due coronavirus concerns, Gardner tells InsideSources he’s estimating the cost at $5 to $10 per ballot. For a small state like New Hampshire, that’s an additional $8 million from the state budget.

And like many opponents of voting by mail, Gardner has concerns about fraud as well, concerns that extend across party affiliation. The left-leaning nonprofit organization ProPublica just published a report noting mail-in balloting does “provide opportunities for voter fraud.”

That was also the finding of the bipartisan Commission on Federal Election Reform, co-chaired by former President Jimmy Carter and former Secretary of State James Baker.  “Absentee ballots remain the largest source of potential voter fraud,” according to the report.

Economist John R. Lott, writing for the Wall Street Journal, noted recent high-profile incidents of election fraud directly linked to mail-in or absentee ballots: 700 fraudulent mail-in ballots with fake signatures in a Dallas City Council election; and a North Carolina congressional race’s results thrown out after a Republican operative was caught requesting 1,200 ballots on behalf of voters, and then collecting them from voters’ homes when they arrived.

“Mail-in voting is a throwback to the dark old days of vote-buying and fraud,” Lott noted. “Because of this, many countries don’t allow absentee ballots for citizens living in their country, including Norway and Mexico.”

And the Public Interest Legal Foundation (PILF) just released data that more than 28 million ballots by mail went unaccounted for from 2012 to 2018, with more than one million going to the incorrect address in 2018 alone.

“Absentee ballot fraud is the most common, the most expensive to investigate, and it can never be reversed after an election,” said the organization’s president J. Christian Adams. “The status quo was already bad for mail balloting. The proposed emergency fix is worse.”

For Gardner, the most frustrating part of the debate is the myth that mail-in balloting increases turnout. “Look at the numbers,” he told InsideSources.

New Hampshire has one of the highest voter turnout rates in the country, while also having the lowest percentages of voting by mail in the country. In 2016, 68 percent of the voting-age population turned out, the third-highest rate in the country.

From 1980 until 1992, however, New Hampshire consistently trailed Oregon in voter turnout.

In 1996, Oregon began transitioning to mail-in balloting. It hasn’t surpassed New Hampshire in turnout since. In fact, none of the five states that conduct their elections entirely by mail (Colorado, Hawaii, Oregon, Utah and Washington) are in the top five states for voter turnout. Hawaii and Utah consistently rank below the national turnout average.

“All this money spent, all these national debates, and yet turnout has trended down,” Gardner said.