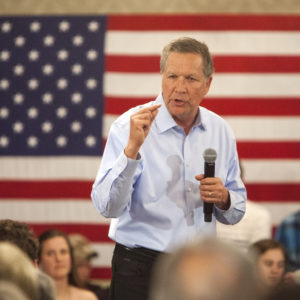 Is John Kasich Laying the Groundwork for a 2020 Presidential Bid?

It turns out that John Kasich can’t get enough of New Hampshire.

The Ohio governor will return to the Granite State this weekend, his first visit since his second place finish in the GOP primary back in February, with a “thank-you reception” for his top supporters on Sunday evening.

“During his campaign, Governor Kasich grew to love New Hampshire, its beauty, its people, and its First in the Nation role,” John Weaver, Kasich’s chief political strategist, writes in the invitation. “He looks forward to connecting with many of his supporters on the 28th. We hope that you can join us for this special evening with the governor.”

Kasich spent much of his time, money and resources in the Granite State, holding more town hall events than any other candidate of either party. His reunion at the Concord Country Club is a chance for him to connect with the people who helped him, said former Sen. John Sununu, Kasich’s NH chair.

“This is really just an opportunity for Gov. Kasich to see and spend time with the great organizers, supporters and activists,” he said in an interview with NH Journal. “It really launched his national effort, and after the campaign ended, we knew it would be great to bring him back to the state and have the opportunity to thank and spend time with him.”

Weaver said the reception is also an opportunity for Kasich to talk about down-ballot races in the state.

“This is about a chance to reunite with his friends in New Hampshire and to have a discussion on preserving the House and Senate,” he said in an interview with NH Journal.

Bruce Berke, an advisor to the Kasich campaign, said the reception is “going to be pretty informal” allowing people one-on-one time with the governor.

This isn’t the first time Kasich has had a reunion in New Hampshire. He also had a similar event in 1999 after he formed an exploratory committee to look into a presidential run.

“When he got out of the race, he said he wanted to do a reception and we actually did,” Berke said in an interview with NH Journal. “Unfortunately, he didn’t make it because of weather issues, but we still held a reception without him. This is much like what we did back then. He truly enjoys his time in New Hampshire and this time around, he wanted to come back and say thanks.”

Kasich’s return to the Granite State has also sparked speculation about a possible 2020 bid for the White House.

“The New Hampshire primary is still going to be first in 2020, but it’s pretty premature to be thinking about that, let alone talking about it,” Berke said. “It is what it truly is, a mission of thanks on his part. It’s going to be what all his conversations are about on Sunday.”

Sununu agreed, but said the governor wouldn’t rule anything out.

“Anything is possible, but John Kasich doesn’t go to bed at night thinking about what office he’s going to run for in the future,” he said. “I don’t think he spends a lot of time thinking about 2020.”

The governor has made it clear that he has a lot of disagreements with Donald Trump. He has not endorsed the Republican nominee and did not attend the Republican National Convention last month, even though it was held in his home state.

Kasich wouldn’t be the only one planning ahead if he was thinking about a 2020 presidential bid. Sen. Tom Cotton (R-Ark.) has visited early primary states and Sen. Ted Cruz (R-Texas) has also remained politically active, endorsing Congressional candidates and visiting their states.

Kasich isn’t coming back to the Granite State just for a good party. He’s also planning to endorse Executive Councilor Chris Sununu in the gubernatorial race. They are planning to campaign together on Monday, but a schedule has not been released yet.

John Sununu, the former senator, said he’s looking forward to having the Ohio governor on the campaign trail with his younger brother.

“It will be fun to have Gov. Kasich campaigning with Chris and he’s run a great gubernatorial campaign so far, very much in the tradition of New Hampshire and going town to town and person to person,” he said. “He’s been a great leader on the Executive Council and I know he will do a good job in the Corner Office.”