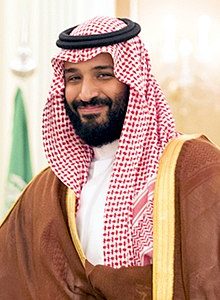 Is MbS the Kim Jong Un of the Middle East?

Saudi Crown Prince Mohammed bin Salman, meet North Korea Chairman Kim Jong-un. These two have a lot in common.  They’re both in their early 30’s. Both have almost unbridled power in their own kingdoms and a way of getting rid of their enemies.

Oh, there may be a few differences. Kim calls his kingdom “communist” while Saudi Arabia is a “monarchy.”  In practical terms, they wield similar powers. They both are dynastic heirs to their fathers. Kim took over after Kim Jong-il’s death nearly seven years ago. Prince Mohammed’s father is still king, but the prince is the real ruler.

Such comparisons come to mind as the world responds in horror to the murder of the Saudi  journalist, Jamal Khashoggi, an American resident allegedly killed most cruelly inside the Saudi consulate in Istanbul where he’d gone as a Saudi citizen to get a marriage license.

The world was also shocked by Kim ordering the murders of a couple of his relatives. First, there was the execution of Kim’s  uncle, who had worked his way almost to the top while married to Kim’s aunt, the younger sister of Kim Jong-il. Then there was the assassination of Kim’s half brother, Kim Jong-nam, snuffed out last year in Malaysia’s Kuala Lumpur airport by two young women set up by North Korean agents to smear his face with a VX nerve agent.

Those killings, though, did not attract the same attention as that of Khashoggi, who had been writing a column for the Washington Post as a critic of the Saudi regime. While Kim threatens his foes, notably the U.S., with nuclear destruction, much of the world, notably the U.S.  and Canada, relies on Saudi Arabia as an exporter of oil. Oh, and U.S. arms manufacturers count on the Saudis for billions of dollars in sales every year.

The comparisons go on.  Trump a few days ago praised Kim Jong-un for the “chemistry” and “energy” that he sensed in their relationship. Earlier, he said the bond was so close that he and Kim “fell in love” – an embarrassing term that he later played down as “a figure of speech.”

Trump and his son-in-law, Jared Kushner, have long since bonded with Prince Mohammed. They see him not only as an enormously rich leader whom they need to court for economic reasons but also as a partner in the greater drama for regional power and influence.

Incredibly, Saudi Arabia, home of the Islamic holiest of holy centers, Mecca, to which millions of the faithful flock every year, also has decent ties with the Jewish state of Israel, the largest beneficiary of American military aid.  Kushner dreams of Saudi Arabia influencing a settlement between Israel and the Palestinians while also standing as a bulwark against Iran, constantly teetering on the brink of war with the U.S.

That reasoning is fantasy that will never work if only because Saudi Arabia, for all its wealth, is already is embroiled in vicious conflict in Yemen. It’s highly unlikely the Saudis would want to go to war with Iran while the crown prince represses his own people, including members of the extended royal family.

Interestingly, there is another parallel here with North Korea. Trump is eager to treat Kim Jong-un in much the same style in which he has befriended the Saudi king and crown prince. He’s likely to meet Kim for their second summit in the fairly near future, having been conned into thinking he can still talk Kim into giving up his nuclear program. We may be pretty sure, assuming they do meet, that they’ll come out with something like a “peace declaration” formally ending the Korean War, long advocated by Kim and endorsed by South Korea’s President Moon Jae-in in pursuit of reconciliation. Naturally, Trump will hail whatever deal he reaches as an amazing accomplishment.

The parallels go on. Trump recently dispatched Secretary of State Mike Pompeo to Pyongyang, where he and Kim spent more than three hours chatting and lunching. Kim, to be sure, showed no signs of giving up his nukes, much less considering anything to do with the “human rights” of his long-suffering people, but Pompeo came home full of happy talk while sanctions remained in place.

Next, Pompeo was off to Riyadh, meeting the Saudi king and crown prince, no doubt remonstrating them for their sins, reminding them of how bad the Khashoggi murder made them look even as they distanced themselves from anything to do with such a heinous crime. These explanations aren’t so much different from the hot air emanating from Pyongyang about the killing of Kim Jong-nam and numerous other acts of terror.

Trump wants to remain on close terms with Saudi royalty, just as he yearns to do with Kim. If there’s any “chemistry,” the word Trump likes to use, it’s in his chemical adherence to dictators whom he should be repudiating.