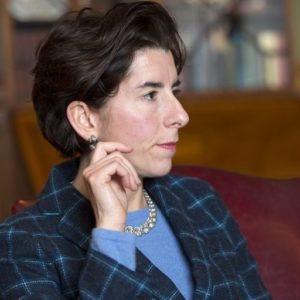 Is R.I. Governor Putting Political Ambitions Ahead of Taxpayers in No-Bid Lottery Deal?

To outsiders, the story sounds like an episode of the TV show “Scandal:” A governor with close ties to a lottery company secretly negotiates a no-bid, twenty-year, $1 billion contract, while the company’s former chairman works as her top fundraiser.

But in Rhode Island, the home of legendary political operator Buddy Cianci, some consider it business as usual.

The governor is Gina Raimondo (D-R.I.), the new head of the Democratic Governor’s Association. The corporate exec is Donald Sweitzer, who until recently was chairman of IGT Global Solutions Corporation, the company that currently has Rhode Island’s lottery and electronic gaming contract.

Today Sweitzer is a $7,500 a month lobbyist for his old company. He’s also the politico so close to Raimondo that she sent him to tell her fellow Democrat, Rhode Island House Speaker Nicholas Mattiello, about the no-bid deal she was pushing for IGT.

“I don’t do policy. I do politics,” Sweitzer said in a statement to the Providence Journal. But he’s being modest. From his days working with Paul Manafort–the notorious DC influence peddler turned convicted felon–to his time at the Democratic National Committee, Sweizer has moved comfortably between both politics and the private businesses who benefit from government largesse.

Not that it’s all been smooth sailing. Sweitzer was political director of the DNC under President Bill Clinton when what came to be known as the “Clinton Fundraising Scandals” began. In the 1990s, the DNC was forced to return hundreds of thousands of dollars in questionable or illegal donations, including some $50,000 laundered through Buddhist nuns who had taken a vow of poverty. The overall Democratic fundraising scandal which dragged on through the 1990s would eventually lead to 22 guilty pleas.

The sweetheart deal Raimondo is pushing for Sweitzer’s old company and the high-profile political role he’s now playing for her in Washington, DC are raising questions about the politically-ambitious governor’s priorities.  Is Raimondo willing to back a bad deal for taxpayers in exchange for Sweitzer’s help on the national political stage?

Multiple sources in the gaming and lottery industry tell InsideSources that a 20-year contract for these services is, as one put it, “highly unusual.” In addition, IGT is under-performing for Rhode Island compared to competitors who handle lottery and gaming for other states.

This is a point opponents of the no-bid contract, like Twin River Management Group, have repeatedly made as they push to have the contract put out for bid. TRMG makes no secret of its interest in wanting the opportunity to bid on this project.  They argue the idea of a no-bid contract should concern everyone, regardless of the outcome.

“We believe the only company that benefits from the no-bid $1 billion dollar, 20-year deal is IGT,” Twin River spokesperson Patti Doyle told InsideSources. “We believe there are other providers who would be very willing and interested in bidding on the project, should the state be willing to have a public, transparent process.”

One potential bidder would likely be Scientific Games, one of IGT’s biggest competitors. “If the Rhode Island market was opened up to bidding, Scientific Games as the leading U.S. based supplier of casino and lottery products globally — including the primary supplier to 9 of the top 10 highest performing instant ticket lotteries in the world – would be excited to supply our record-breaking products to maximize revenue for taxpayers and beneficiaries of Rhode Island,” Scientific Games Vice President of Corporate Communications Susan Cartwright told InsideSources.

Andrew Cline of the Josiah Bartlett Center, a free-market think tank, adds that a 20-year contract, regardless of transparency, also raises questions about whether taxpayers are the priority in this deal.

Both Gov. Raimondo’s office and the press office of the DGA declined repeated requests for comment.

A sweetheart deal for an underperforming vendor negotiated in secret and set to last twenty years is, even among the political high rollers of Rhode Island, a high-stakes risk. Why is Raimondo taking it?

The most common reason to become head of the DGA is to foster larger political ambitions. It’s no coincidence that three of the last five DGA chairs are either running or have run for president. Could she be a progressive Democrat’s moderate pick for vice president in 2020? If Trump is re-elected, what about 2024?

Not only does Sweitzer have the political connections to help Raimondo lay the groundwork for a future political bid, but IGT currently has contracts in key states across the country, including California, Florida and Virginia.

“A bad contract costs taxpayers millions of dollars, but it’s spread out over twenty years so they don’t ever see it or feel it,” the insider said. “But a good deal for Sweitzer and IGT pays off for Gina [Raimondo] right now.”