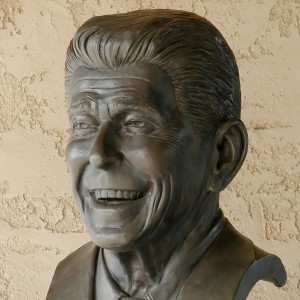 A bust of Ronald Reagan at his presidential library in California.
[IS] Opinions

Is Reagan’s Band Getting Back Together?

This week, the Committee to Unleash Prosperity, helmed by leading economists Arthur Laffer, Stephen Moore, Larry Kudlow, and Steve Forbes, has launched its new website dedicated to reigniting a free market Reaganesque movement. The website, UnleashProsperityNow.com, will feature articles from an array of economists on how to restore America’s booming growth rates.

If there was ever a time for a supply-side revolution, now would be it.

As a result of The Fed’s 0% interest rates, President Obama’s numerous tax increases, and the unprecedented levels of debt racked up under Presidents Bush and Obama, wages remain stagnant, the labor participation is at a 38-year low, and GDP growth remains paltry at around 2% this year.

Thankfully, America has proven resilient to economic woes like these.

When President Reagan took office in 1980, he inherited an economy in arguably worse shape than the one we are stuck with today. In 1980, the purchasing power of Americans was getting crushed from double-digit inflation, which led to dollar shocks and gas rationing. The economy was also in the midst of a recession, and the unemployment rate was 7.5%.
But this economic malaise was no match for Reagan’s signature optimism, or his pro-growth agenda. Reagan rekindled the flames of free enterprise through the passage of the Kemp-Roth tax cuts, fighting inflation, and deregulating the economy. The result was soaring economic growth (at one point peaking at over 9%), low unemployment, and a wave of prosperity which was maintained for two decades.

We’ve had a Reagan Revolution, now it’s time for a Reagan Revival. That’s exactly what the Committee to Unleash Prosperity is hoping to do.

According to UnleashProsperityNow.com, the groups’ policy objectives are to: enact a low-rate flat tax, limit government spending, decrease regulation, restore sound money, and expand free trade. The Committee says “We believe these building blocks will restore American prosperity, and we are dedicated to promoting economic growth and opportunity for all.” And if history is any indicator, they are absolutely right.

The Committee’s Founders appear uniquely equipped to handle the task of restoring growth. Larry Kudlow served in the Office of Management and Budget under President Reagan, Steve Moore was the research director for Reagan’s privatization commission, and Arthur Laffer has been coined “The Father of Supply-Side Economics” due to his influential “Laffer Curve,” and the critical role he played on Reagan’s Economic Policy Advisory Board. These Reaganites are notably joined by Steve Forbes, whose two campaigns for president, and Forbes’ media empire, have galvanized support for the flat tax, and a return to the gold standard.

If the band has truly gotten back together, this could have remarkable implications for U.S. economic policy. An information vacuum has long existed on supply-side thought (which, despite its proven success, appears to have joined Obi-Wan Kenobi in exile on Tatooine).

After a decade of stagnant growth, Americans are likely eager to hear the pro-growth message of those who orchestrated the Reagan recovery. With the launch of its new website, the Committee to Unleash Prosperity is attempting to do just that. Poll after poll shows that the most important issue on voters’ minds is the economy; it’s time to offer them solutions.

Will the launch of the new website signal that these Reaganites are ready to take their message of prosperity and opportunity to Main Street? If so, we could truly have another supply-side revolution on our hands. And that’s something that will really “Make America Great Again.”

Mark Elsasser is the Editor-in-Chief of Conservative-Force.