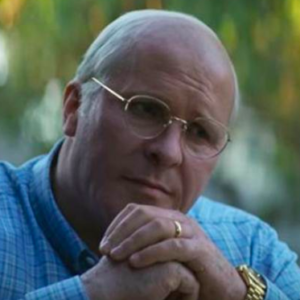 Christian Bale as Dick Cheney in the movie Vice.

Is “Vice” The Worst Best-Picture Nominee EVER?

“Not really a biopic but a two-hour hate-fest that stoops lower than necessary and rarely scores a laugh.” — Newsday

“The film lacks insight, ingenuity, and intensity, skimming the surface of history like a drunk guy at a holiday party who read a Wikipedia entry that he really wants to talk to you about right now.  — RogerEbert.com

“‘Vice,’ the Dick Cheney Biopic, Might Be the Worst Movie of the Year” – The Daily Beast.

Is Vice the worst movie ever nominated for Best Picture?

Calling the 2018 film Vice poorly reviewed is like saying the officiating in the Saints/Rams NFC championship was “a bit sub-par.”  Filmmaker Adam McKay’s attempt at political satire based on the life of former Vice President Dick Cheney was panned by both top critics and fans in general, managing a mediocre 64 percent score on Rotten Tomatoes, and an awful 54 percent from the audience. (Average “Tomatometer” score of last year’s nine nominees? 92 percent.)

And yet somehow the movie did manage to score a Best Picture nomination from the Academy of Motion Picture Arts and Sciences, along with highly-praised pics like Roma  and The Favourite.

So how did Vice (“A failure on its own terms”—San Francisco Chronicle), a film that did so little to inspire critics (“The film goes off the rails…the result is a shambles” – NYTimes Review of Books) or audiences (“it doesn’t help that there’s virtually no character development across the 132 minutes of Vice”.—Boston Globe) end up on the list of the allegedly eight best movies of 2018?

Though he disagrees with the contention that it’s the worst “Best Picture” nominee ever (“It’s not even the worst this year,” Bunch says), he does agree that if the same film at the same level of performance and production were made about, say, Al Gore or Joe Biden, they would not be on the “Best Picture” list.

“Of course not,” Bunch says.

It’s no surprise that the movie industry is dominated by left-leaning politics. There is no conservative equivalent to the phrase “Hollywood liberal.” But is it really the case that politics can thoroughly trump artistry on such a high-profile, audience-centered as the Oscars?

“For certain Hollywood types, the right politics is a kind of artistic sensibility,” says Abe Greenwald, senior editor at Commentary magazine. “‘Best Politics’ is essentially an unspoken category, and just as important as Best Screenplay or Best Director. Being liberal and attacking conservatives is, among other things, an aesthetic decision.”

“Vice is a terrible movie—other than Christian Bale as Cheney, he was terrific.  It’s vile, it’s mean-spirited, it’s all over the place from a film-making standpoint. And despite a massive ad campaign, audiences rejected it because they knew they were getting played, politically,” Smith says. “By making it a ‘Best Movie’ pick, Hollywood is sending up a red flag: ‘Down with the evil Republicans!’”

From an economic standpoint, this doesn’t appear to make sense.  The potential audience for movies and TV shows, aka “The American public” is currently divided 25 percent Republican and 34 percent Democrat. As unpopular as President Trump is right now, he still has the support of 40 percent of Americans, or about 130 million potential TV viewers.

And Vice has certainly lived down to box office expectations. As of MLK Day weekend, the film had yet to cross the $40 million mark, putting it behind such box-office powerhouses as Paddington 2 and Sherlock Gnomes.

From a cultural standpoint, however, picking Vice makes perfect sense. One of the features of the Trump era is institutions that at least feigned political neutrality in the past—journalism, the entertainment media, academia, sports—have responded to the Trump presidency by coming out in full #Resist mode.

During the Bush and Obama years, most Americans viewed the news media as liberal, for example, but many journalists pushed back, arguing that while they might be personally on the Left, their reporting was straight down the middle.

Today, reporters and editors at the New York Times, Washington Post, CNN and elsewhere openly trumpet their anti-Trump stance in social media and allow it into their news coverage.

In Hollywood, industry pros long claimed their only mantra was “Show Me The Money!”  Forget “Red vs. Blue”—it’s all about the green. Today the impact of politics is so powerful that, not only are audiences overwhelmed with anti-Trump sentiment from morning chat shows to late-night comics, but p.c. politics mean the Oscars themselves still don’t have a host.

Greenwald adds another factor for Hollywood’s surge in public partisanship: “In part because the Democrats have no clear leader, the media–press and entertainment–are taking the reins when they can.”

While bad movies winning big awards is nothing new (Dances with Wolves beat Goodfellas for Best Picture in 1990), Vice stands out as a film that even its biggest fans admit is flawed.

It’s impossible to disconnect Vice’s awards from its politics. Which in a way makes it the perfect—if not the best—picture of the year.