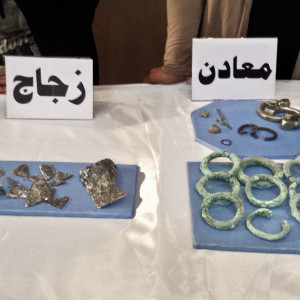 Recovered antiquities are displayed at the Iraqi National Museum in Baghdad, Iraq, Wednesday, July 15, 2015. Nearly 500 artifacts recovered by U.S. Army commandos during a recent raid in Syria targeting the Islamic State group were displayed at the Baghdad National Museum Wednesday after being returned to Iraq. (AP Photo/Vivian Salama)
[IS] Opinions

ISIS and the Antiquities Trade – Looting to Sustain Terrorism

Income determines the viability of the Islamic State (ISIS).  And the terrorist organization has amassed a fortune.  Yet, the group’s greatest strength remains its greatest vulnerability.  The Islamic State depends on lucrative revenue streams that extend well beyond its occupied territories.  Those financial lifelines remain susceptible to interdiction.  The illegal sale of Syrian and Iraq antiquities, some dating back almost 2000 years, represents one of those revenue streams.  As ISIS profits from peddling irreplaceable cultural artifacts, an entire region’s history is being sold off to underwrite terrorism.

In Syria alone, five of the six UNESCO World Heritage sites have experienced extensive damage from ISIS or affiliated looters.  These cultural terrorists record themselves taking sledgehammers to thousand year old Roman statues.  Meanwhile, some of those same delinquents hastily unearth ancient cemeteries in search of finger-sized cylinder seals once used as jewelry or identification by their owners.  These pieces are extremely easy to smuggle and a school bag full would be worth nearly $1 million.

Unlike most of ISIS’ illicit operations, the sale of artifacts has a direct connection to unsuspecting consumers in the United States.  The direct link between ISIS funding and the American antiquities market gives the U.S. government the opportunity to exploit and obliterate that funding conduit.

The relationship between terrorist organizations and the market for illicit cultural heritage existed well before the Islamic State, though.  The Taliban sold antiquities, as did Al Qaeda.  One of the September 11th hijackers even tried to hawk Afghan antiquities to a professor during his time as a student in Germany.  But despite the known connections, the U.S. government remains slow to act.  This hesitancy has much to do with the market being incredibly difficult to monitor.  Items often have unclear chains of custody and usually travel through supply channels that straddle the line between legitimate and illegitimate business.  Foggy backstories leave consumers unaware or willfully ignorant that their money may have funneled back to the Islamic State.  Enforcement officials then avoid tackling the otherwise impossible task of proving an intent to break the law.

More importantly, the U.S. government tends to treat the illegal antiquities trade as a criminal operation.  Few bother to characterize the pernicious association between looted artifacts and terrorism fundraising as a national security concern.  This mindset needs to change.  Government indifference and customer ignorance here can be as dangerous as premeditated support for terrorism.

The Islamic State has reportedly earned anywhere between $36 and $360 million from the sale of antiquities looted from areas under its control.  The attacks on September 11th cost around $500,000 to finance, according to the 9-11 Commission.  Calculations reveal that even the lowest estimated earnings ($36 million) would give ISIS the funds necessary to execute at least 72 attacks on par with September 11th.  And, assuming a similar aftermath, those theoretical attacks would kill over 214,000 people and cost nearly $250 billion in economic loss and recovery.

These statistics illustrate that earnings determine capability.  They also remind us that ill-gotten gains always play an instrumental role in Islamic terrorism.

As with any non-state actor, ISIS depends on illicit income because it remains excluded from the conveniences of modern diplomacy and cut off from legitimate participation in the global economy.  The organization’s expansionist ideology only deepens its dependence on illegitimate earnings.  The Islamic State does not want to aimlessly wreak havoc on its enemies.  Nor does it want to break off from an established country in order to enjoy a sedentary lifestyle within the confines of a sovereign nation.  They aim to expand.  For the sake of efficiency, ISIS understands the world as Dar al-Harb, or non-Muslim lands of the enemy; and Dar as-Salam, those considered Muslim lands (which may or may not also contain the enemy).  ISIS leadership uses offensive jihad to achieve some version of Dar as-Salam in hopes of hastening Armageddon and the establishment of a worldwide caliphate, in accordance with its understanding of Koranic instruction.  Whether a perverted interpretation or not, they believe it.

A robust economic agenda remains the only way for ISIS to ensure the solvency of its imperial ambitions.  Therefore, the United States must work to sever each and every revenue stream that funds this organization.  Yes, some governments knowingly subsidize the Islamic State through the purchase of oil.  And yes, diplomatic sensitivities hamper enforcement in this area.  But the sale of antiquities represents a clear and actionable target for unilateral operations.

The U.S. Senate is currently considering The Protect and Preserve International Cultural Property Act, which already passed the House.  Although well-intentioned, the proposed law uses broad language and toothless reforms, none of which aggressively target the Islamic State.  The vagaries leave too much room for unintended consequences; always a dangerous byproduct of government legislation.  Instead, the U.S. Congress needs a bill dedicated to the ISIS’ trade with at least the following:

Defeating ISIS is the priority and the legislation should treat it as such.  More details on the how this can be accomplished can be found in an upcoming NCPA study – Shutting Down ISIS’ Antiquities Trade.