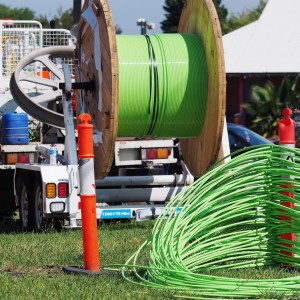 Internet service providers (ISPs) and fiber makers are asking the Federal Communications Commission to support Republican-proposed rules to override state and local government regulations they claim slow broadband deployment and hold back investment in new technologies. But some states, localities, and consumer groups say the plan won’t give more consumers access to high-speed broadband, and may in fact hurt services for some rural and underserved populations.

In April, the FCC passed a Notice of Proposed Rulemaking (NPRM) aimed at streamlining broadband infrastructure deployment by overriding state and local regulations that slow construction, like obtaining permits to attach fiber lines to utility poles and new pole construction.

“When you make it easier and cheaper to build high-speed networks, companies are more likely to build those networks,” FCC Chairman Ajit Pai said of the proposal, which the agency is now seeking comment on.

Broadband providers predictably submitted comments to the agency in favor of the plan to give the FCC power to override state and local governments and speed up the approval process, while denying those governments the ability to disapprove construction in some instances. Other stakeholders like Corning Inc., the top industry supplier of optical fiber cable, also support the change, since it means more ISPs buying more fiber (Verizon, the second-largest wireline broadband provider in the U.S., agreed to purchase $1.05 billion-worth of fiber from Corning from 2018 to 2020 two days before the FCC meeting).

Included in Corning’s comments to the agency is an economic study by economist Hal Singer of Georgetown University’s McDonough School of Business, funded by Corning, that predicts substantial growth in broadband deployment and investment if the FCC’s plan is adopted.

“Our models forecast that with these new rules in place, up to an incremental 26.7 million premises would become economical to serve with next generation networks, driving up to $45.3 billion in capital investment,” the study reads.

According to Singer, the bulk of those 26.7 million homes and local businesses exist in suburban and rural areas, where it’s often cost-prohibitive to expand high-speed networks. The vast majority of Americans in rural and underserved areas have only one choice of broadband provider.

“The incremental investment unlocked by the proposed measures could generate up to about 358,000 jobs, support up to $28.4 billion per year in incremental economic output over the deployment period and drive consumer welfare improvements of up to $2.7 billion,” Singer said, adding his estimates “may be conservative.”

Some localities, like southern New Jersey’s Cumberland County, disagree. The rural county, underserved by telecommunications carriers due to the cost of deployment, says the agency’s premise that local regulations are impeding network expansion is “inaccurate.”

“[I]f fiber is being deployed in the rights-of-way, it is being encouraged, but the major providers are either resisting or refusing to provide wire line service due to the cost considerations,” the county says in its filing. “Instead, these providers in recent instances have sought to deploy wireless transmission facilities in public rights-of-way based on the claim that they are utilities, they are entitled to use the rights-of-way and that they are entitled to use them at no cost.”

The county expresses concern about the loss of local control under the FCC plan, and it worries the plan may encourage deployment of wireless broadband, which offers significantly less speed, quality, and reliability.

The FCC’s plan also reverses other Obama-era regulations that required providers to give adequate notice to subscribers and the FCC when replacing old copper networks with new internet protocol (IP)-based fiber and wireless networks.

Prior to that order, some areas experienced a loss of services during such “tech transitions” including fax and alarm systems, and in some cases couldn’t even guarantee 9-1-1 service. Pai’s proposal gets rid of rules that required providers continue supporting old networks and get permission from the FCC before replacing them to protect against any loss of services, which the FCC says will speed up the transition from legacy to IP networks.

Consumer advocacy groups like Public Knowledge oppose the removal of those rules, on the belief they will “abandon critical consumer protections, threaten the stability and reliability of the nation’s communications networks, and railroad state and local governments, all for the apparent convenience of incumbent telecommunications providers upon whose products and services, tens of millions of Americans rely,” the group’s filing reads.

Mignon Clyburn, currently the only Democrat serving on the commission, voted to advance the order along with her two Republican colleagues, agreeing “[t]he time is ripe for opening up pole attachment reform, taking a look at how we can work with local governments to remove barriers to deployment, and for generally evaluating how we can further streamline processes for rolling out new services.”

At the same time, she hoped the consumer protection concerns would be raised during the comment phase, and warned of the repercussions if they weren’t.

“On the road from legacy to modern services, this item seeks comment on removing stop signs and traffic lights along the way,” Clyburn said. “I only hope, that we do not crash and burn.”