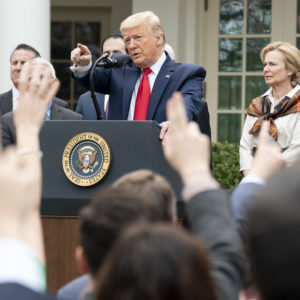 The future of Donald Trump’s presidency rests in large measure on COVID-19.

If the virus subsides and programs to combat it are successful, Trump’s chances of re-election in November are quite good. If the virus proves almost impossible to defeat in coming months, if it actually spreads, then Trump’s likely opponent, the Democrats’ Joe Biden, has a better than even chance of defeating him.

Right now, no matter how loudly and how often Trump claims to have attacked the virus crisis at the outset, he’s the target of tremendous criticism from the U.S. media for having done too little, too late.

“Despite Timely Alerts, Trump Was Slow to Act,” declares a headline on the front page of The New York Times. “Pandemic Warnings Early and Often,” says a subhead.

Trump’s core followers may not be impressed by the steady drumbeat of attacks in editorial and opinion pages of The New York Times and Washington Post, but he has to show that he really knows what he’s doing as he deals with a crisis that has raised the U.S. jobless level to its highest peak since the Great Depression that followed the historic crash of the U.S. stock market in 1929.

Right now he’s trying to think of ways to get away from the lockdowns and shutdowns that have emptied offices, factories and schools while hospitals overflow beyond emergency capacities and nobody really knows when the pandemic ends.

The timing of the virus from Trump’s political point of view could hardly have been worse. In the face of tireless attacks by his foes in Congress and the media, he had one thing on his side that no one could deny. The stock market had hit record highs and seemed to be going nowhere but up.

That all ended as the virus claimed victims from Washington state to its New York epicenter and the market plunged suddenly and sharply, then revived somewhat in a series of ups and downs that still leave it way below the highs it achieved earlier this year.

Trump will no doubt go on proclaiming all the good that he is doing to rescue the nation from financial ruin, but his presidency really relies on his success in living down what his critics — and some of his advocates too — perceive as his slowness to respond to the impending disaster of a disease often likened to the global flu epidemic of 1918 that took 40 million lives, including more than 600,000 Americans.

One of the biggest charges of the American left is that Trump has “blood on his hands,” that he is already responsible for ending the lives of more than 25,000 Americans, more than the number claimed by the virus in any other country.

That charge is patently ridiculous. You can’t seriously accuse Trump of having deliberately killed people off by mistakes in judgment that leaders of many other countries have made when confronted with epic catastrophes, military or medical.

Many of us had no idea the disease would spread around the world. We were all caught by surprise.

China’s President Xi Jinping initially was slow to order strong measures after the virus broke out in the industrial city of Wuhan. And South Korea’s President Moon Jae-in responded with promises of aid for China before the virus had spread among worshipers in a branch of the Shincheonji sect in Daegu who had returned from Wuhan.

Trump now is making up for his early misjudgment of the virulence and viciousness of the virus by coordinating with state governors and making policy decisions showing his determination to take charge of the counter-offensive.

By holding lengthy daily press briefings, often with top aides, including Vice President Mike Pence, he is taking advantage of a pulpit from which he can be sure of maximum publicity. The point is to convince Americans that he’s a wise statesman, not a loud-talking politician.

Trump is all the more the target of derision by his critics, who like to compare these briefings to those in Saigon at which U.S. military spokesmen during the Vietnam War often gave optimistic views of a program that was not going well. Biden’s campaign rests on his success in showing that Trump was not only incompetent but deliberately unprincipled in his responses.

This campaign will be different from others in that the candidates will not be able to stage huge political rallies. They will have to rely on television appearances, speeches and statements before small groups and, of course, the latest news on the economy, the stock market and the battle against the disease.

It would be impossible to predict right now who will come out ahead, Trump or Biden, just as it’s not possible to know when the pandemic will really end and life will return to normal.