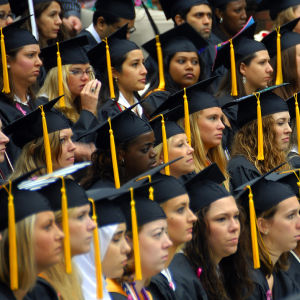 Polonius is starting to look prescient.

It was way back in the Elizabethan era when Shakespeare’s patriarch admonished, “Neither a borrower nor a lender be,” but that warning might sound like good advice to today’s Americans, who now owe almost $1.2 trillion in student loan debt.

As of this month, a new book enters these discussions: The Real College Debt Crisis: How Student Borrowing Threatens Financial Well-Being and Erodes the American Dream by authors William Elliott III and Melinda Lewis.

The authors participated in a New America Foundation panel on Wednesday, where Elliott argued for moving away from a loan-based model of college financing and towards an approach based on incentivized saving. Specifically, he’d like to see the federal government provide every young child with a college savings account, giving kids some base amount of funding toward high education and perhaps matching the money they put away over time. Part of the idea is to get families planning for college early, more than a dozen years before their children will graduate high school, hopefully reducing the amount they borrow.

“I’m not saying to throw out income-based repayment plans, because we have people hurting and need something, but at the same time, we need to end this problem in the long term,” Elliot said.

Which is not to say scholars don’t understand all of Americans borrowing. The New America panelists all agreed that some form of higher education, be it a four-year degree, trade school or a different type of certificate program, is vital in today’s economy.

“An undergraduate borrowing is just doing what he or she has to do to get to, essentially, the first place in their life where they have at least a chance of working hard and succeeding,” said Kevin Carey, the director of New America’s education policy program.

Carey argued that one tragic truth about higher education is the extent to which states have divested in colleges and universities over the past few decades. Schools are also spending more money at a time when family incomes aren’t growing.

“This conversation is really about the restoration of something that we did have for, like, a good 30 years. There really were very affordable options,” he said. “By the way, there’s no reason whatsoever to think that people are getting a better college education now for all this extra tuition. They’re just paying more.”

Carey added that he thinks the Obama administration missed an opportunity by backing away from a proposal to rate nonprofit and public colleges based on the demonstrated value of their degrees in the marketplace. Finally, he stressed one major paradigm shift he’d like to see as these conversations more forward: student loans shouldn’t be considered financial aid.

“If I go to a car dealer and they say, ‘We’ll finance the car,’ they’re not doing me a favor,” Carey said. “They’re doing it because it’s in their interest to help me buy what they’re selling.”

When it comes to loans, he said prospective students need to change their thinking: “That’s not a financial aid package. It’s a debt package.”