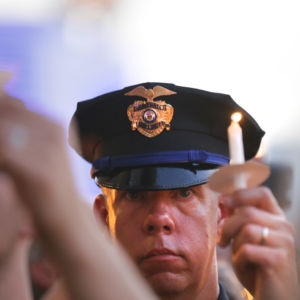 It’s Time for Honest, Thorough Conversation About Policing and Race in America

Posted to Politics July 13, 2016 by Todd A. Cox and Danyelle Solomon

Multiple shots fired point blank into a man outside of a convenience store, pinned down on the ground by two officers. Multiple shots fired into a car pulled over for a broken tail light, while a 4-year-old child sits in the backseat. One day later, the country woke up to yet another devastating act of gun violence: The deplorable coordinated assassination of law enforcement officers in Dallas as #BlackLivesMatter protesters peacefully marched the streets against police violence.

As parents of black children and American citizens, we are simultaneously scared and enraged. The constant barrage of images of black men being gunned down by law enforcement with seemingly no accountability reinforces what W.E.B. DuBois called a double consciousness for African-Americans, whereby African-Americans live life with two conflicting identities — as the oppressed other and as an American.

The amount of violence in American streets today — streamed on a 24-hour news cycle — breeds fear in our communities, and these most recent killings leave our families — black and white — shaken. The police officers whose lives were lost in Dallas on Thursday night — who, just hours before, were standing in solidarity with peaceful protesters of police violence — remind us of the shared human desire to live in peace and the potential that exits to foster positive relationships between law enforcement and our communities.

But the simple fact remains that if America is to make progress toward a true “post-racial” state of being, we must have honest and thorough conversation about policing and race in America. The stories of Alton Sterling and Philando Castile — both African-American men — should be a wakeup call for every American. These tragic events did not occur in isolation. They are part of a larger problem, a problem that centers on race and the criminal justice system.

People of color make up more than 60 percent of the prison population, yet represent 39.9 percent of the U.S. population. African-Americans represent 13 percent of the U.S. population, yet comprise 40 percent of those who are incarcerated. Among black males born in 2001, one in three will go to prison at some point during their lifetime, while one in six Latino males will be incarcerated. African-Americans are also 2.5 times more likely to be arrested than their white counterparts. Today, young black males are 21 times more likely to be shot by a law enforcement officer than their white counterparts.

As President Obama stated earlier this week, such shootings “are symptomatic of the broader challenges within our criminal justice system, the racial disparities that appear across the system year after year, and the resulting lack of trust that exists between law enforcement and too many of the communities they serve.”

The history of policing and race relations in this country are deeply intertwined. As FBI Director James Comey stated earlier this year, “At many points in American history, law enforcement enforced the status quo, a status quo that was often brutally unfair to disfavored groups.”

We, as Americans, should question how selling CD’s (Alton Sterling), selling loose cigarettes (Eric Garner), playing with a toy gun (Tamir Rice), or walking down the street can justify the use of force that results in death or serious injury.

After the deaths of Michael Brown and Eric Garner, President Obama called for a 21st-century task force on policing. The task force laid out a number of important recommendations and best practices for jurisdictions to follow as a roadmap to begin to repair the serious gulf between law enforcement and the communities that they are sworn to protect.

However, more can and must be done. If we are to make real change and help ensure an end to senseless and preventable police killings, we must mandate bold and aggressive reforms. This includes, but isn’t limited to, increasing the use of special prosecutors in police misconduct investigations; implementing improved and robust law enforcement training, including de-escalation and implicit bias; and mandating data collection on police misconduct and fatalities and injuries involving the police to ensure transparency.

Americans should not tolerate violence against anyone, whether that be violence against law enforcement or law enforcement’s abuse of power against their fellow citizens. We must change our expectations and demand less violence and more accountability. We must also be prepared to use our democratic and political processes to make these changes a reality. We must call on our mayors, our governors and our elected officials to not allow unlawful behavior. We must demand it.

Todd A. Cox and Danyelle Solomon

Todd A. Cox is the director of Criminal Justice Policy at the Center for American Progress, where his work focuses on a range of issues concerning criminal justice reform. Danyelle Solomon is the director of Progress 2050 at CAP.