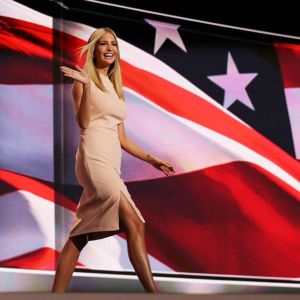 Donald Trump sent many messages with his big economic speech in Detroit on Monday. He’s basically gotten on board with House Speaker Paul Ryan’s tax plan. He’s occasionally able to get through formal, teleprompter addresses like a normal politician, even in the face of 14 — yes, 14 — separate protesters. And, when it comes to the concerns of working women, potentially a pivotal voting bloc in the November general election, the Republican presidential nominee’s top adviser still seems to be his 34-year-old daughter, Ivanka.

Widely seen as her father’s most effective campaign surrogate, the former model and current Trump Organization executive turned heads during the Republican National Convention last month when she said a President Trump would “focus on making quality childcare affordable and accessible for all.”

Trump said he’d unveil his specific proposal “in the coming weeks,” having collaborated “with my daughter Ivanka and an incredible team of experts.”

Now, economists are already arguing that Trump’s plan wouldn’t help the poorest Americans. After Ivanka’s speech, media pointed out that he has no history of promoting government programs for childcare or women to get “equal pay for equal work,” both of which his daughter promised on his behalf. (In fact, what he does have is a long history of explicit sexism, objectifying women — including Ivanka — publicly, calling several of them vulgar names, and lamenting his own wife’s transition into the working world.)

And yet, from a strictly political perspective, there’s no question Ivanka is a huge asset to her father. She was a bright light at a thematically dark convention that actually turned voters off from the Republican ticket. Her policy and political contributions — which reportedly include a softer tone on Planned Parenthood, private criticism of attacking a judge for his Mexican heritage, and the ouster of controversial former campaign manager Corey Lewandowski — undoubtedly nudged Team Trump in a more mainstream direction.

In fact, the main problem for Ivanka — and other Republicans who hoped for a Trump campaign devoid of sexism, racism, conspiracy theories and calls to violence — is that the would-be first daughter has limits to her power. Her father is clearly not running the race she’d have him run, but she told People Magazine she gives feedback privately. The most candor she offered the publication: “daughters often disagree with things their fathers say.”

Ivanka obviously doesn’t disagree with her father all that much, as she’s not just supporting him but actively pressing his case. She’s firmly ensconced — some might say implicated — in the Donald Trump project. Yet it’s fascinating to imagine how different the GOP standard-bearer would seem if he just followed his daughter’s most obvious advice, like the little words of wisdom she dispenses from her #WomenWhoWork Twitter feed.

“Carry yourself with confidence, not conceit,” Ivanka tweeted over the weekend. She’s also posted about respecting honesty and transparency, leading with grace, and avoiding gossip.

That’s right — the daughter of the man who questioned the president’s birth certificate, linked a political rival’s father to the JFK assassination and promoted dozens of other conspiracies actually has this on her website: “When gossip comes up, put it in its place. Say, “Oh, wow, that doesn’t sound right. Is that a fact or did you just hear that from someone?'”