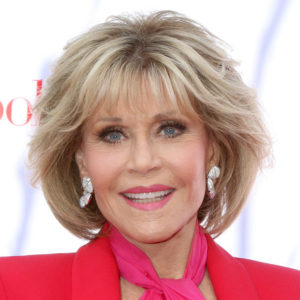 Jane Talks the Talk, but Does She Walk the Walk?

People who live in glass houses shouldn’t throw stones, especially if they live in 7,100-square-foot glass houses, as Jane Fonda does.

Well, she’s not actually living in her four-bedroom, six-and-a-half-bath 7,100-square-foot glass house right now. She recently sold it for something a bit more modest (details below).

At the moment, she is camped out in Washington on Capitol Hill, bellowing into a microphone every Friday about the need to take drastic steps to combat the “climate crisis.”

Fonda — like a number of other celebrity “climate crisis” actors — talks the talk, but doesn’t walk the walk.

How big is the carbon footprint of a 7,100-square-foot home with a glass elevator, a sprawling chef’s kitchen with verde quartz countertops, a media room with a full bar, a spacious gym, heated porcelain floors, steam shower and soaking tub in a “tranquil, resort-like setting”?

Well, it’s about three times the physical footprint of the typical American single family home, which is a mere 2,355 square feet.

Fonda’s mansion does have “green” features, including a solar-heated pool and “eco-friendly” ventless fireplaces. Which — pssssst — uses natural gas, which results in carbon-dioxide emissions.

How about Jane’s new place?

It’s a more modest 6,679-square-foot townhouse with a “clean, yet warm feel.” It has a three-car garage — Teslas only! — a “sumptuous” master suite and a “balcony plus office.”

Reportedly, she paid cash for the place: $5.45 million.

Not that there’s anything wrong with that. Jane is a successful actor and has every right to live in a nice — and large — home. She earned her money, and deserves to enjoy the fruits of her success.

But what about the rest of us?

There’s something obnoxious about her tone-deaf advocacy of policies — such as the Green New Deal — that would make it very tough for typical Americans, who cannot afford a $5.45 million townhouse, to afford even a 2,355-square-foot home.

In California, Jane’s home state, just one of several new “green” laws that goes into effect when the new year arrives will make such homes increasingly unaffordable. One of these is a mandate that every new home be roofed with solar panels — at a cost of $20,000-$30,000 additional (vs. the cost of asphalt shingles) according to builders.

Chump change for a rich climate crisis. But a lot of green for average people.

Jane can afford to preen green, but she’s not making any lifestyle sacrifices herself.

Like so many other “climate crisis” actors — Leonardo di Caprio is another infamous example — her posturing comes off as either disingenuous or delusional. One wonders whether Jane would be bellowing into her megaphone if the result of her bellowing was a hot cot in a communal stack-a-prole apartment complex.

DiCaprio’s trip to Capitol Hill to testify about the climate crisis — we have much to learn about science from an actor — on his private jet resulted in the production of more carbon dioxide in five hours than the typical American’s car produces in a year.

But at least Leo went home.

Jane is about to hit the road with her megaphone. After she finishes haranguing people within earshot of her megaphone perch on the steps of the capitol, she plans to take her Termagant Tour (it’s technically called Fire Drill Friday) “around the country because people want to start it in their own towns and cities. We’re going to take it and the army of climate activists,” she says.

With particular attention paid to the young.

“They are the ones who inspired me and they’re going to be here when I’m gone.”

Which is true. They may also be  jobless — and homeless — if Jane and her army succeed in “ratcheting up their action” on climate.

The Institute for Energy Research estimates that the Green New Deal will cost trillions, which is a bill the typical American can’t afford to pay. For something they probably don’t want to buy.

A white paper produced by the institute summarizes as follows: “This really isn’t about climate change at all. That is simply the pretext to fundamentally transform every aspect of society and culture the way progressive leftists have wanted to do even before people talked about ‘global warming.’”

Rich, elitist leftists like Jane, who won’t be giving up their glass houses, three-car garages and sumptuous master suites.

But the rest of us will be asked — that is, forced — to accept sacrifices above and beyond anything Jane and her fellow climate crisis actors seem willing to make.

Which ought to make typical people red with rage at the hypocritical effrontery of it all.