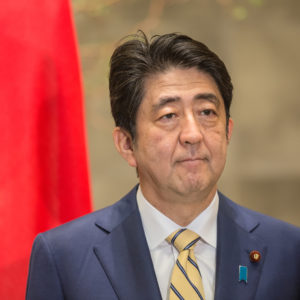 Japan Divided Over Any Revision to Its ‘Peace Constitution’

TOKYO — The overwhelming success of Prime Minister Shinzo Abe in the latest elections for members of the Japanese “Diet” — the peculiar word for Japan’s parliament or national assembly — portends hardening of tensions and priorities in Northeast Asia.

Yes, Abe would dearly like to revise Japan’s post-war “peace constitution” whose Article 9 declares “land, sea and air forces … will never be maintained” and “belligerency of the state will not be recognized.” (Hence the term “self-defense forces” for Japan’s military establishment.)

In fact, one reason Abe called the snap election was to shore up his popularity, to show he was in charge after his ratings fell to 30 percent a few months ago.

Abe, however, faces widespread opposition to revising the constitution, foisted on Japan by the victorious American general Douglas MacArthur during the U.S. “occupation” that followed Japan’s defeat in World War II.

For sure Japanese rightists believe it’s high time to discard this vestige of American power, but Japanese are also used to the assurance that Japanese troops will “never again” rampage across Asia as they did in 35 years of Japanese rule over Korea and the takeover of large parts of China, most of Southeast Asia and the South Pacific. Although Japanese “self-defense forces” are well trained and equipped, they have not fired a shot in anger since Emperor Hirohito broadcast his surrender on August 15, 1945.

The driving force behind the right-wing resurgence in Japan is concern about North Korea, whose leader, Kim Jong-un, has been rude enough to send long-range missiles high above the large northern Japanese island of Hokkaido. He also has threatened to fire missiles at U.S. bases, not just on the American territorial island of Guam but also on Japanese soil.

True, many people on the southernmost island prefecture of Okinawa are not happy about Kadena, the largest U.S. air base in the region, and Marine bases up and down the island. Abe, however, vigorously supports the U.S. presence and defies protests of construction of a new U.S. Marines air station off the northeastern coast at Henoko. He and his pals want the Americans to stay at least until Japan has the muscle for defense against North Korea, which Japanese believe would have the support of their historical enemies, China and Russia.

In order to revise the constitution, however, Abe has to ram the new version through two formidable obstacles.

First, the measure would need the approval of two-thirds of the Diet, controlled by the long-ruling Liberal Democratic Party in alliance with the Komeito, a front for the Buddhist Soka Gakkai. They should command enough votes if all members of the LDP, plus the Komeito, vote in unison, but that’s not a certainty. Members of the Komeito, in particular, profess a love for universal peace that some see as definitely at risk.

Second, assuming the revision does make it through the Diet, Abe and his cohorts must persuade more than 50 percent of the nation’s voters to endorse it. That may be difficult. Although they steamrollered to success in the latest elections, LDP and Komeito candidates still got less than half the total votes. Plenty of anti-war political figures, weakened though their parties and factions may appear, will be campaigning mightily against any threat to the beloved “peace constitution,” ghost-written though it was by Americans.

But let’s say Japan eventually does loosen the constraints on Japanese forces waging war far beyond Japanese territory. Then what?

North Korea has greeted Abe’s electoral success with a warning of Japanese “reinvasion of the Korean peninsula” in a bid to renew Japanese rule over the whole Korean peninsula, including South Korea, as in the years before 1910.

Beyond these considerations hovers the response of China and Russia to any move to free Japan from Article Nine. Both of them view rising Japanese military power as a menace to their own security, not to mention regional ambitions. Battle lines would be drawn with results that could again plunge the region into war.