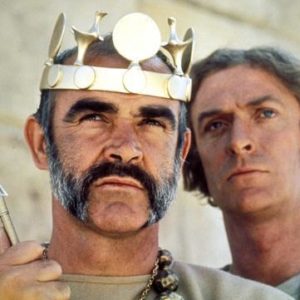 Joe Biden, The Man Who Would Be POTUS

In the 1975 movie “The Man Who Would Be King,” — the best Sean Connery film that doesn’t include the phrase “shaken, not stirred” — an Afghan mountain tribe mistakes a British soldier for a god-king and lavishes him with wealth and power.  It’s a great gig until Connery’s character gets a bloody bite from an angry woman and the tribe sees that he’s merely human.

One drop of blood, and the movie ends with Michael Caine carrying the former god-king’s head in a sack.

Which brings us to Joe Biden.

The former Vice President isn’t wasting any time with nuance.  He’s read the polls, and now he’s making his case: the number one priority of Democratic primary voters is defeating President Trump, and the one candidate who has the best shot of doing just that is Joe Biden. And so the former vice president has staked his entire campaign on “electability.”

As his wife Dr. Jill Biden put it at an appearance in Manchester, N.H. on Monday:

“Your candidate might be better on, I don’t know, healthcare than Joe is, but you’ve got to look at who’s going to win this election, and maybe you have to swallow a little bit and say, ‘Okay, I personally like so and so better,’ but your bottom line has to be that we have to beat Trump.”

The comment could be dismissed as irrational exuberance from an enthusiastic spouse, except that the Biden campaign is explicitly making the same appeal. Team Biden’s first TV ad features graphics highlighting his poll numbers vs. Trump as the narrator intones, “We have to beat Donald Trump. And all the polls agree: Joe Biden is the strongest Democrat to do the job.”

On the campaign stump in Iowa two days later, Biden himself said, “I think that for the first time in my career, the person viewed as who is best capable of defeating this president rises above the test of, ‘I have to agree with the person 100 percent.'”  What a coincidence that the “first time in his career” is the one time Biden has a serious shot at the White House.

And why not? Polls do in fact show Biden performing better in theoretical match-ups with the Democrats’ Political Enemy Number One, President Donald Trump. On Wednesday, a new Morning Consult poll found Biden and Sen. Bernie Sanders were the only two Democrats defeating Trump head to head, and a new YouGov/Economist poll released the same day found more Democrats (66 percent) believed Biden would beat Trump than any other candidate. Bernie was second (60 percent) and Sen. Elizabeth Warren (58 percent) was third.

The question isn’t “electability,” but “durability.”  Electability is fundamentally a circular argument: Support me because I can win, and the polls prove it because you’re supporting me because you think I can win.  The problem, as Sean Connery’s character discovered, is if the facade of electability ever breaks — you’re done.  Unlike a candidacy based on personal appeal, political ideology, or a specific campaign platform, it’s hard for an electability campaign to survive setbacks.

Which is one reason many political pros are reluctant to embrace it.

“Electability rarely trumps ideology in a primary, unless it’s 2016 and your name is Hillary Clinton,” says Massachusetts-based GOP strategist Patrick Griffin.  “Electability is a fragile thing, especially for a gaffe-prone Biden whose voting record, handsy behavior and tone-deafness to the ideological language of today’s progressive Democratic party are a problem.”

Jim Merrill is a New Hampshire veteran of the two Mitt Romney presidential campaigns, and he calls Biden’s electability approach “a disaster in the making.”

“You live by the poll, you die by the poll. Once his numbers slip — and they will — he will have nothing to fall back on having ceded the issues and passion to other more progressive and policy-focused candidates.”

Other experienced politicos don’t agree.  Terry Shumaker is a prominent Clinton ally in New Hampshire who calls himself “Proudly Biden 1988 & 2020.” He notes that Biden isn’t selling himself as a sure winner, he’s merely making his case based on his experience. “Look, given the dangerous path this president has taken us on, people ask me all the time ‘who can best beat Trump?’ All Joe is doing is answering that question for them,” Shumaker says. “If people think the best candidate to take on Trump is someone else, they will vote for them instead.”

The real test of the electability strategy is results. So has it worked? Is there a candidate in recent political history who’s run on “electability” and made it to the White House?

“The White House? No,” says Michael Barone, co-founder of the Almanac of American Politics. “But some candidates have won the nomination in part through the ‘electability’ argument,” he told InsideSources. It was part of Michael Dukakis’s appeal (competence, not ideology) as well as John Kerry’s (his military record).”

And, like Hillary Clinton, they both lost the general elections.

Bob Shrum, who ran Kerry’s 2004 presidential campaign, acknowledges their electability strategy, “though we were less explicit,” he tells InsideSources. “Our goal was to manifest, not claim, electability. To show people, as we put it, that Kerry was ‘the real deal,” that he was plausibly presidential and had a real chance to beat Bush.

Shrum, who worked on eight presidential races before taking his current position as Director of the USC Dornsife Center for the Political Future,  says electability as a strategy hinges on “how strongly voters feel about removing the incumbent. Right now they feel very strongly about removing Trump, which is why Biden has a steady lead in the polls. Not huge, but steady and substantial.”

What about Republicans?  “Not George W. Bush,” says GOP consultant Mike Dennehy, who worked on the McCain 2000 campaign. “He didn’t run on electability. In fact, our argument against him was that McCain could win the general election because our numbers were so much better against Gore.”

Barone adds that the electability argument’s appeal may be weaker today than in the past. “Democrats have seen their nominees win the popular vote in six of the last seven elections (which is why some want to get rid of the Electoral College).  Their view is different from, say, 1992 when Democrats had lost five of the last six presidential races.”

It’s an answer that works today. But what will Biden’s response be if his numbers dip tomorrow?