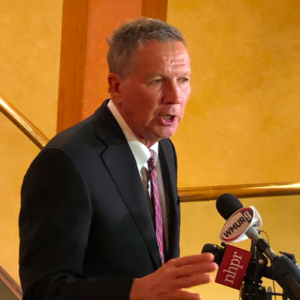 John Kasich talks to the press in Concord, NH during a January, 2019 meet and greet.
News

John Kasich Advisor: If We Ran Against Trump In N.H., We’d Win.

Reports of John Kasich’s demise might be, if not greatly exaggerated, at least mildly overstated.

There was a flurry of media coverage in response to the former Ohio governor’s statement during a CNN appearance today that he sees “no path” to victory in a GOP primary challenge of President Trump.

“There is no path,” Kasich told CNN’s Jim Sciutto. “There is no path right now for me. Ninety percent of the Republican Party supports [Trump]. Maybe somebody wants to run and make a statement and that’s fine. But I’ve never gotten involved in a political race where I didn’t think I could win. And right now there’s no path.”

In other words, Kasich said what anyone who can do basic math already knows. Plus, Kasich larded his comments with plenty of “right now” caveats, even concluding with, “But we never know what the future will bring. Who knows?”

And sure enough, just a few hours after the Kasich CNN appearance, his longtime political consultant John Weaver was telling Rolling Stone magazine that the governor is “keeping all options on the table.” Weaver also made this eyebrow-raising claim:

“Millions have left the party since Trump became president,” Weaver said. “Would they return to vote in a primary?” Weaver added that a Kasich 2020 campaign could run into a dead end quickly: “We could defeat Trump in New Hampshire, but then what?”

Predicting a Kasich victory in the Granite State? That’s pretty bold, particularly considering the Monmouth poll from mid-May has Trump’s approval among the NHGOP at 86 percent favorable, while Kasich is at 34 percent favorable, 44 percent unfavorable– underwater among Republicans by 10 points.

“In fact, two-thirds of Granite State Republicans say they would have voted for him in the 2016 primary if they could do it over again – which is nearly double the level of support he actually got three years ago,” Monmouth found.

And if Kasich did have a legitimate shot in the GOP primary here in New Hampshire, he gave it up when he took his current gig at CNN.  “I like what I”m doing now and I particularly like what I’m doing on CNN,” he said today, waving a red cape in the face of the GOP base. As NHJournal wrote in January:

“Short of volunteering to testify at President Trump’s impeachment hearings, it’s hard to imagine anything the former Ohio governor could do that would damage his viability in the GOP more than going to work for CNN. He and his team must realize how much the Republican base reviles the network of Anderson Cooper and Jim Acosta.  Even MSNBC would be less damaging to Kasich with the GOP base because they view it as openly partisan and, therefore, accept its biases as fair play.”

Why would Kasich’s consultant John Weaver make such a provocative public prediction, particularly at a time when there’s so little chance of a serious primary challenge? It’s another sign that there’s not a lot of serious thinking going into a potential Kasich presidential bid.