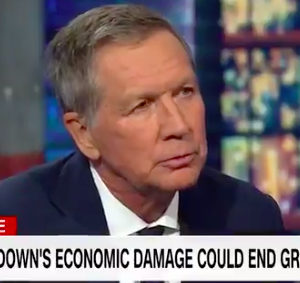 Tuesday night Gov. John Kasich was on the set of “Cuomo Primetime” with Chris Cuomo, a show that regularly features liberal commentators like Paul Begala, Sally Kohn and Bill Press. Their topic Tuesday night–and every night–is how horrible Donald Trump is and, by extension, how awful the Republican Party is.  Cuomo linked Trump to the “white nationalist” comments of Iowa Congressman Steve King and called him the most untrustworthy person in politics he’d ever seen. Kasich nodded, sighed and largely agreed.

It was the beginning of John Kasich’s career as a paid political analyst for CNN and the end of his campaign for president as a Republican.

Short of volunteering to testify at President Trump’s impeachment hearings, it’s hard to imagine anything the former Ohio governor could do that would damage his viability in the GOP more than going to work for CNN. He and his team must realize how much the Republican base reviles the network of Anderson Cooper and Jim Acosta.  Even MSNBC would be less damaging to Kasich with the GOP base because they view it as openly partisan and, therefore, accept its biases as fair play.

CNN, on the other hand, continually pushes the blatantly #FakeNew that it’s a nonpartisan news platform.  Given its overt, tireless anti-Trump bias (it was the home of Trump-decapitating comedian Kathy Griffin and anti-Trump obsessive Don Lemon) this claim of objectivity drives many conservatives crazy.

Plus–it’s Trump’s target number one.  And John Kasich, who ran for the GOP nomination just three years ago, chooses to go to work for them?  It’s a great way to give Trump the finger, but a lousy way to win the GOP nomination.

Several other NHGOP politicos agreed. “I don’t know what he’s thinking,” one told NHJournal. “Even if he spends all his airtime bashing Trump instead of the GOP, Republican primary voters are going to hate him for it.”

They weren’t loving him before. A poll of Republicans last year gave Trump a 62-27 margin over Kasich in a primary. Which wouldn’t be so bad…except these were Ohio Republicans.

Still, John Kasich is slightly more popular than the Cable News Network.  When asked to name their most trusted news source, only 3 percent of Republicans named CNN.

A Republican activist told NHJournal “Being the Republican who hated Trump the most isn’t going to win you points among the base, even if Trump does crash and burn. ‘I told you so’ is rarely a winning message. Kasich will be in their face, every night on a network they hate, reminding them he’s not on their team. It might be good TV but it’s terrible politics.”